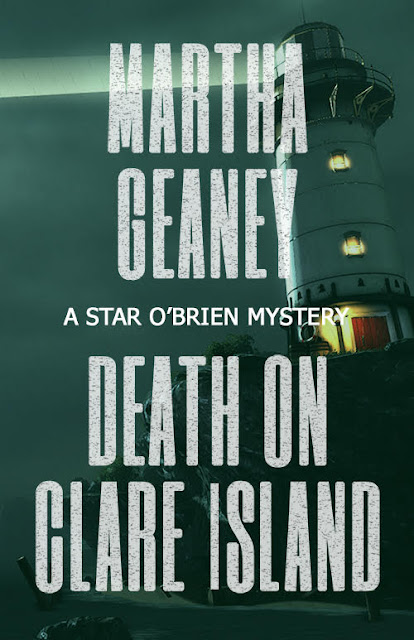 Star O’Brien is a haunting voice for the dead, the missing, and the lost.

Star O’Brien is a successful American information broker who can’t
solve the mysteries of her own life. She comes to County Mayo, Ireland
to settle her dead lover’s estate and look for her Irish mother who has
been missing since Star was six years old. She is on the scene on Clare
Island, when a body is discovered. It seems like a closed case involving
the island’s dangerous cliffs and drug abuse. Star didn’t believe it
when the police dismissed her mother’s disappearance as “abandonment”
and she can’t believe the stories she is hearing about the dead young
man.

Star must separate truth from fiction in the testimonies of those
close to the victim including the head of an anti-drug foundation, a
volatile ex-lover, a besotted young art student, and a restorer of the
island’s ruins. Before long, Star’s investigation becomes the catalyst
for a second murder, and she must work fast to avoid becoming the third
victim. As she uncovers the truth about the murders, this fiercely
independent, complex, female protagonist must also own up to her own
past and a potential future with a charming new confidant. 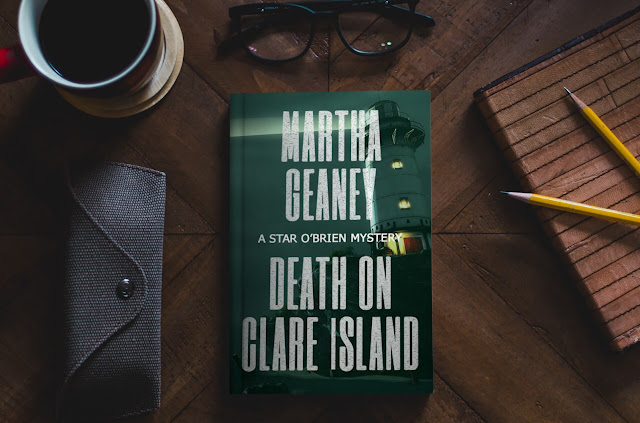 Just a
fifteen-minute boat ride from Roonagh on the west coast of Ireland, the
towering mountain of Clare Island guards the entrance to the mouth of Clew Bay
from the Atlantic Ocean. Gráinne Mhaol’s castle sits on the rocky headland at
the island’s harbor. Most visitors come to view the scenery and the bottle-nose
dolphins swimming in the bay. Others come to explore the archeological history,
including the Cistercian Abbey where the 16th-century pirate queen
is buried.
Matthew
Sumner liked the five-hour walk around the island best of all: the danger of
ignoring “Beware of Cliff Edges” signs that warned of falling to the rocky
inlet below, the steep climb up Knockmore mountain, the view of Inisturk and
Inisbofin islands from the peak, the small lakes, the potato lazybeds, and the
Abbey Church. Oh, he would recommend any of the walks around Clare Island if
pressed for an opinion. The shorter walks made more sense at the end of a day
working in the Abbey ruins. Most of the time he selected the quickest route to
the island’s harbor and hotel, where he ate his evening meal, saving the full
circuit of the island for weekends. But he wanted the solitude and shadows
provided by Knockmore for tonight’s excursion. He required the unobstructed
view of the Atlantic Ocean.
As he made
his way toward the southern side of the island, he took short strides,
conserving his body movements to deflect attention. Zipping up his light
jacket, he watched for small boats nearing the island, or for someone
approaching him from the harbor. He was ready to slip on his stocking cap,
making it difficult at a moment’s notice for anyone to identify him.
Keeping
this last point foremost, he felt for the cap in his pocket. Perhaps, he
thought, he should put it on now, picturing his bleached blonde shaggy hair
acting as a kind of beacon. It had been a cold, dull day, and it looked like a
devil of an evening. The menacing dark sky to the east foretold the storm
headed for the island. He could see the whitecaps rising angrily out of the sea
as they bashed onto the beach. He scanned the bog and the coastline while his
fingers continued touching the cap like a monk fingering his beads.
Intuition
told him he’d soon find what he sought, so he resolved to brave the wind and
impending storm. It was then he spotted a lone figure, head hunched below the
shoulders. His first thoughts wavered between fear and hope that tonight’s
excursion would prove profitable. The person lifted a hand in salutation.
Feeling a little puzzled by this, Matthew wondered why the individual he
pursued would be friendly. He looked beyond the anonymous shape to the dark
ocean. When he didn’t see a boat, he immediately relaxed, thinking this was an
islander out for an evening walk. In the few moments it took for the person to
shorten the space between them, he heard his name whispered in the wind.
“Matthew,
what are you doing out in this nasty weather?”
The voice,
dull and sleepy, floated in the air between them like the hypnotic sounds of
the sea. Loose, black clothing draped the person’s frame, making it impossible
for Matthew to discern whether it was a man or woman. His steps slowed. For in
that moment, straining for a closer look, he understood too late that he had
made a grave mistake. His final thoughts were of how much he wanted to live as
the water choked off his breath. Then the darkness took him. 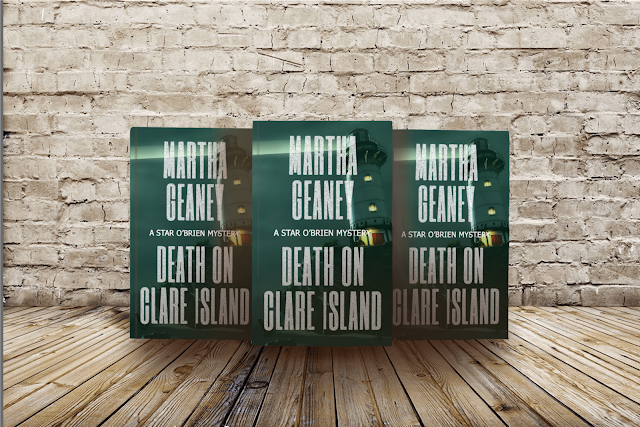 I’ve been writing since I could hold a crayon in my hand. When I ended up in education, I taught grammar, composition, and spelling. This isn’t what I’d expected when I majored in English. A few years ago, I decided to write a cozy mystery series. Before I could publish the first book in the series, I became the dean of a business school. All my fiction writing was on hold until about two years ago when I decided I would persist in this writing journey.

About ten years ago, I self-published Bring Your Spirit to Work: One Woman at a Time. That non-fiction effort grew out of my experiences in leadership. Currently, I am focused on the cozy mystery genre.

I love reading mysteries, especially ones that feature strong, woman leads. Over time, I found that I couldn’t always find a book authored by a female that featured a female lead. That when I decided to write a mystery series.

I am a novice when it comes to breaking into the field. There’s a tremendous amount of work requirements, in addition to the writing, to edit, distribute, and market the book.

Star O’Brien is an independent, feisty, strong female lead. She’s had a few losses in her life. That’s made her more independent than most; and it’s also made her a strong advocate for the lost, the missing, and the dead.

Creating the characters, especially the series recurring characters. I’m absolutely in love with Star and Aunt Georgina. It gives me great pleasure when someone reads the book and says they loved the characters.

Editing. There’s so much on the line in terms of producing a product that readers and fans will love. Quality is important. Finding the right editor who will tell me what the issues are is critical. Then, a great copy and proofreading edit.

Plan and plot. Writing a mystery is one of the most challenging genres. I don’t think I could do this by the seat of my pants.

Mysteries are at the top of my list. I love Deborah Crombie’s work. I also like to read non-fiction books that deal with productivity issues.

I bring myself and my experiences into my books. For example, I have a familial relationship with Ireland so I set the Star O’Brien books there. My husband and I used to own a Cessna; I earned my private pilot’s license. I bring that experience into the books as well. I have a beautiful Schipperke puppy that I’m working with to compete in agility.

I’d love to hear from readers. They can reach me via my web site page: www.martha-geaney.com or follow me on Facebook: @marthageaneyauthor. I’m planning a newsletter so interested readers can sign up for that at my web site. 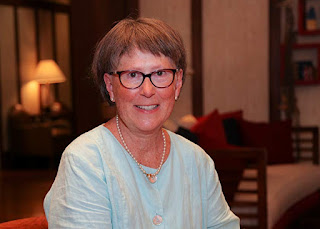 MARTHA M. GEANEY is the author of the highly praised non-fiction, women’s leadership book, Bring Your Spirit to Work: One Woman at a Time.
She is also the author of the Star O’Brien fiction series which is set
in the west of Ireland, and the United States. Martha was born in New
York City but lived in New Jersey beginning at the age of eight. In
2017, Martha and her partner, Bill, moved to Florida where she enjoys
cooking, reading, swimming, and her Schipperke puppy, Turlough.Before turning to indie writing, Martha was a teacher, management
consultant, university professor, and the dean of a business college. It
was her leadership experience as a management consultant and her
research for her doctorate that prompted Martha to write a self-help
book for women who aspire to leadership roles.Martha’s passion for Ireland began when she made her first trip, at
the age of four, to County Mayo, birthplace of her mother, and to County
Cork, birthplace of her father. She returned to Ireland again at the
age of sixteen to attend a boarding school in Castlebar, County Mayo,
for two years. Since then, Martha has visited her cousins and friends in
Ireland for more than thirty-five years. It is her love for the people,
the country, and all its beauty that inspired her to create a mystery
and suspense series, set in Ireland, about an amateur detective, Star
O’Brien, who is an American.

She is currently working on her second Star O’Brien novel.