Retired attorney Preston Howard obsesses about the newly elected,
bombastic and narcissistic president, and three corrupt Austin police
officers whom he represented and saved from capital murder charges and
execution ten years before. After his wife divorces him and his drinking
reaches gargantuan proportions, Howard’s thoughts turn to murderous
impulses as the only way he can stamp out one, or both of his fixations.
Howard and his co-author, daughter Anne Howard, tell the story, often
with hilarious observations, of compulsion, addiction, love, and in the
end, the search for justice.
Praise:
“I thought Preston Howard’s first book was terrific, but Justice
Delayed is Justice Denied is a home run! One of the best books I’ve read
in years.” – John P. Davis, Knoxville, Tennessee
“Preston Howard’s writing and insights into politics and the legal
system keep getting better and better. Justice Delayed is hilarious and
on point!” – Amy Margulies, Austin, Texas

order your copy below 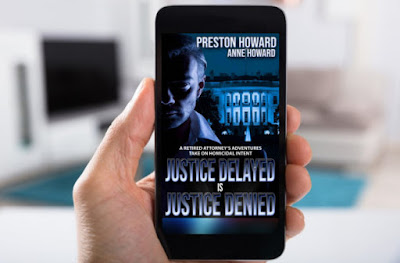 I cackled while watching The Donald in June, 2015, as he descended the elevator at Trump Tower like an Arabian potentate, Melania walking below him in one of her bazillion-dollar outfits (or more…can there be more than a bazillion?).

Right off the bat, I figured no rational person would listen to this
clown as he ranted about Mexican rapists, recapturing oil in the
Mideast, jobs lost to China and Mexico, blah, blah, blah. Right after the
Great Bloviator announced his candidacy, Jon Stewart licked his chops
and rubbed his hands together in glee but expressed sorrow that he would
soon be leaving The Daily Show, unable to skewer this phony poohbah in
Jon’s inimitable style.
Boy oh boy, did Jon and I ever get this one wrong, as did most of the
elitist commentators—the FOX reporters impostering as legitimate media
excluded, of course. And as well did the multiple Republican candidates, who scorned Trump as a laughable huckster not worthy of consideration. His list of gaffes during the campaign mounted day by day, but the Trumpster shrugged them off like water off a duck’s back each time and just kept lying all the way to victory and the White House.

I wonder often how many times after the Republican Convention, Jeb Bush
and Marco “Trump has little hands” Rubio asked themselves, “How the
fuck did this nimrod beat me?” And Hillary, bless her heart, she must wake
up every day thinking “I deserved to win; I was entitled. How could
all those deplorables snatch away my victory? How dare they?”
______________________

In my college freshman English class at the University of Tennessee (Harvard of the South, don’t ya know), I made the only A in the class and realized that I had a knack for writing. In my career, I wrote three professional books about police unions. When I retired and my wife told me I’d better do something to quit bothering her all the time, I turned to writing novels. Boy, my wife sure has a knack for knowing what’s best for me!

My first novel, The Sheltering Palms, could be best described as a fictional autobiography. In the current book, Justice Delayed is Justice Denied, I changed gears and wrote a crime thriller. I so liked the protagonist (and my pseudonym Preston Howard), that I extended his life in this novel for at least another tall tale of his escapades and misadventures.

I’m not locked into any particular genre. In fact, my third novel will be about a police strike, which will be a departure from the other two novels.

During my career, I lucked into writing the first book about police unions and became a hot commodity in the field. And that was before I knew s**t about shinola. After retiring, I saw many old folks who sat around waiting to die; and that didn’t work for me. So like Elizabeth Warren, I had a plan for that….Spend my time writing novels!

A common theme runs through both novels: many people stray from the honorable path for many reasons, like drugs, alcoholism, infidelity, poor decisions, or crime, But in the end, anyone can pull themselves up from their bootstraps, do the right thing, and redeem themselves.

Finishing the novel and knowing that it’s of a high quality so people will read and enjoy it.

The hardest part for me was developing a storyline that will hold the reader’s interest and make sense. Once those goals have been met, the process of writing the words has been relatively easy.

Have a creative mind, have enough life experience to draw from, and discipline yourself to sit down and put words into a story.

My reading interests are varied. I have recently completed John Fowles The Magus, Nelson DeMille’s superb novels about Viet Nam—-Badge of Honor and Upcountry, Margaret Atwood’s The Testaments, and The Crowded Hour by Clay Risen about Teddy Roosevelt and the Rough Riders. Teddy lived his life to its fullest…a real hero to me.

I am a somewhat modest fellow, but here goes. I enjoy movies, hiking, travel, hanging out with my extended family, and of all things…playing bridge!

I am on Facebook: Preston Howard Author. My email is authorprestonhoward@gmail.com. My website/blog is prestonhowardauthor.com 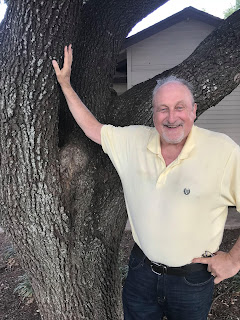 Preston Howard has retired from his rewarding profession as a labor
lawyer, where he represented law enforcement officers not only in Texas
but across the country. As a renowned expert, he spoke at meetings and
conferences about topical labor law issues not only in the United
States, but in other countries as well.  He now lives in Hot Springs,
Arkansas, where he spends his time writing novels.
His first book, “The Sheltering Palms,” was highly praised. One
reviewer said, “…had me hooked right from the start.” Another person
wrote, “…storytelling at its best.”His latest effort, “Justice Delayed is Justice Denied,” tracks his
struggles with retirement: a divorce from his wife, alcoholism, and
thoughts of murder either of the president or three corrupt police
offices he represented ten years before. As he wrestles with these
concerns, he also dips his foot into the dating scene, meeting an
attractive senior lady. As in his first novel, Preston Howard’s
observations about the human condition are hilarious and on point.