DISCLAIMER: This content has been provided to SHANNON MUIR’S THE PULP AND MYSTERY SHELF by YA Bound Book Tours. No compensation was received. This information required by the Federal Trade Commission.

Check out my stop on the Ruins on a Stone Hill blog tour! 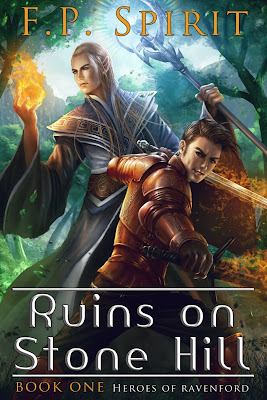 Magic is easy. That’s what Glolindir thought, until he came across his first real monster. Luckily, he survived, thanks to his new “friends.”Lloyd, the reckless young warrior with blades of fire. Seth, the sarcastic halfling who might be an assassin.Aksel, the genius little gnome whose very touch can heal.Little did they know that things were about to go from bad to worse.After one hundred and fifty years of relative peace, dark forces stir around the little town of Ravenford—monsters, black magic, creatures of the night.The only thing standing between Ravenford and certain destruction is this band of young misfits.

I’ve always been interested in writing, but didn’t truly start until ten years ago. My kids and I started role playing with some friends. I took notes which slowly progressed into short stories, and eventually an entire novel. Before I knew it, I had an entire series.

What genres do you write in? Fantasy, but I have thought of delving into my other favorite genre, Sci Fi.

What drew you to writing these specific genres? I was a big Sci Fi fan growing up. Star Trek was my favorite TV show at the time. Somewhere in high school, a friend of mine introduced me to Lord of the Rings. Ever since then, I was hooked on fantasy.

What do you want readers to take away from reading your works? There are a couple of themes throughout the series. One warns about being overconfident and even conceited. Another is overcoming your fears. A third deals with racial prejudice. There are also themes of faith and spirituality woven throughout the books. However, the largest message has to do with working together despite our differences and just how much can be accomplished by doing so.

What do you find most rewarding about writing? Creating characters, creating a world, having it all play out before your eyes. When I write, I actually see the scenes play out like a movie in my head. When I get something down on paper that matches that, I feel a sense of awe and accomplishment.

What do you find most challenging about writing? Making certain that everything makes sense. Many folks think that anything goes in fantasy, but I try very hard to address things in a sensible manner. For instance, I go through great pains, mapping out the locations of everyone in the larger battle scenes. With magical spells, arrows, and even daggers flying left and right, I need to know where everyone is at all times.

What advice would you give to people wanting to enter the field? Do it because you love it. Don’t write to make a living – that’s a one in a million shot. I you love writing, then write for yourself. Also, ignore critics. If someone hasn’t taken the time to write a full book like you did, then I don’t feel they truly have the right to criticize your effort.

What type of books do you enjoy reading? As I said before, my favorite genres are Sci Fi and Fantasy, though I have been known to read the occasional mystery novel. My favorites series do tend more toward fantasy, though: Lord of the Rings, the Belgariad by David Eddings, many of the Shannara books by Terry Brooks.

Is there anything else besides writing you think people would find interesting about you? Um…pauses and scratches his head…define interesting? I develop software for my day job, and my hobbies include yoga and video/pc games. I also have a wonderful family who all put up with my “idiosyncrasies.” If anyone finds that all interesting, then I appreciate the compliment, but honestly, I’m just an average person.

What are the best ways to connect with you, or find out more about your work? The best way is through my website (fpspirit.com), or my signing up for my mailing list (can be done from that site.) I post a blog there which is also in my newsletter, which includes excerpts from my latest not yet published works.

Lloyd followed Seth’s finger and saw a strange sight. The
bottom half of a skeleton stood in the middle of the path. He watched curiously
as Brundon rushed up behind it and kicked it with his boot. The creature
whirled around and began chasing him, but Brundon dodged and ended up behind
it. The tracker kicked it and dodged again. It was like watching a strange
dance.
A familiar voice came from behind him. “He sure is
stubborn.” Lloyd turned in time to see Titan walk up beside him, a thin smile across
her lips. “I guess we should go help him.”
Lloyd fell in beside her. They walked up the trail together
as the crazy fight continued. They stopped a few feet away, watching as Brundon
dodged the skeleton again.
Titan chuckled softly. “Would you like a hand?”
Brundon glanced their way and shook his head. “No, I got
this.”
Titan glanced at Lloyd and shrugged. “Like I said,
stubborn.”
Lloyd had a sudden idea. He held out his hammer and called
over to the tracker. “Hey, Brundon, care to try it out?”
Brundon had just swung behind the skeleton again. He glanced
over at Lloyd and his eyes fell on the proffered weapon. A broad smile spread
across his face.
“Don’t mind if I do.”
“Sure, accept his help and not mine,” Titan said with mock
disappointment.
Brundon backed away from the sightless skeleton. “Only his
weapon, love, only his weapon. Of course, if you want to hand me your mace…”
“No, no. I’d like to see you wield that hammer.”
“Suit yourself.” Brundon reached the two of them and
accepted the hammer from Lloyd, attempting to heft it with one hand. Without
warning, the head of the hammer dipped and began to fall. Brundon swiftly
grasped it with his other hand, catching it just before it hit the ground.
A short laugh escaped Titan’s lips. “Having some trouble
there?”
“I’m…just…fine…” Brundon grunted. Slowly but surely, he
lifted the hammer back up. He grasped it firmly with both hands, and after a
few test swings was able to effectively wield the weapon. “See, piece of cake.”
Titan chuckled under her breath. “Yeah, sure it is.”
Brundon ignored her, turning and rushing the roving
skeleton. In a couple of minutes he reduced it to a pile of cracked bones.
Brundon stood over the pile with a grim look of satisfaction on his face.
“Well?” he said, glaring defiantly at Titan.
“Oh yes, all hail Sir
Brundon, the skeleton slayer.”
Sharp snorts of laughter broke out from down the trail.
Lloyd turned around in time to see Seth roll off the skeleton he had been
sitting on and fall onto the ground. He lay there laughing until he couldn’t
breathe.
Titan taunted him further. “Well, Sir Brundon, there’s another skeleton waiting to meet its end via
your mighty mallet.”
Brundon fixed his partner with an acid stare. It quickly
faded though, replaced with a half-twisted smile. “Why not.” He shrugged, then
strode down the trail to finish off the last skeleton. While Brundon joyfully
hammered away, Lloyd and Titan rejoined the others. 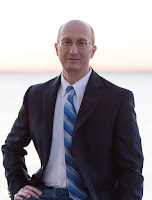 About the Author
F.P. Spirit has always loved fantasy. From the moment he received his very first copy of Lord of the Rings back in high school, he was hooked. Today, somewhere between work and family, F. P. manages to write young adult sword and sorcery fiction. His series, Heroes of Ravenford, chronicles the adventures of a young band of misfits in the dangerous world of Thac. The last book in the series, The Baron’s Heart, is due out this fall.
To learn more, you can go to his website, sign up for his newsletter, or follow him on Twitter.
Heroes Facebook Page: https://www.facebook.com/HeroesOfRavenford/