The following content was originally presented by Shannon Muir on a separate blogging site and has been moved here to consolidate all blog tours in one place for historical purposes. She would love for readers to continue to discover past content, even if this is not the blog it was originally featured on.
We’re thrilled to be a part of the virtual book tour for ALEXANDRA FOREVER: BEGINNINGS by urban fantasy/scifi author D.W. Richards. Scroll down and you can find out how to buy a copy!

Would you risk erasing yourself from ever existing to save the immortal soul of a beloved friend?

Two middle-aged sisters, Nadenka and Anastasiya, travel to a remote
northern mountain where they must contend with their notorious, and
seemingly immortal grandmother, Alexandra, in their quest to save an
aged and frail member of their coven, Terra, from demonic possession.
Deep family wounds need to be addressed before they can do what is
required for the exorcism. But time is running out. The woman they are
trying to save is dying. As the clock is ticking down, an evil legion
emerges to stand between them and saving Terra’s immortal soul. 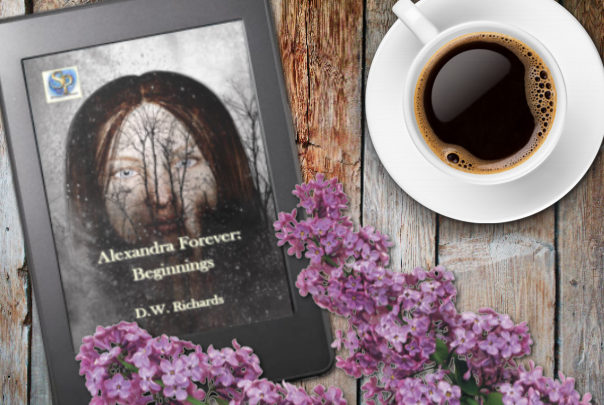 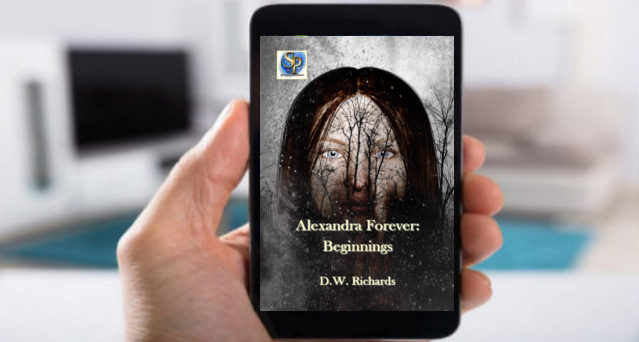 The sun shone into a room, the main features of which were a window, a hospital bed and a wheelchair. An elderly woman sat complacently on the edge of the bed, not oblivious to her surroundings but not engaged with them, either. She paid little notice to the male nurse bent before her as he inserted her feet into a pair of fuzzy slippers before lifting her into the waiting wheelchair. He had considerately positioned it to face the window knowing that she spent much of her time watching the world outside. The nurse retrieved a silver brush from the bedside table.
“You have a guest coming today, Terra,” the man said, “Alexandra. Won’t that be wonderful? She always brings a smile to your face.”
In long strokes he gently brought order to Terra’s shoulder-length white hair. There was no hint left of its youthful red, but the curls still maintained their defiant resolve. He stopped when, without apparent reason, Terra turned her head toward the doorway. A moment later the door was flung open and Alexandra stepped through. The hoodie was zipped back up and the black boots had been exchanged for a pair of retro high-top sneakers. She was twirling a key fob with her right hand.
The two women smiled at each other, Alexandra beaming widely while Terra welcomed her with her eyes.
“Well hello,” the nurse welcomed, cheerfully.
“Pete,” Alexandra replied, in greeting as she slipped the fob into a front pocket of her shorts.
“Don’t get me wrong, marvelous to see you,” he remarked, “but isn’t this visit a little outside your usual routine?”
“I had some business to tend to. Brought me down a little earlier than usual,” she explained, before directing focus on Terra.
“Getting my girl all dolled up for me?” she asked.
“That, I am.”
Pete did a squint-eyed overview of Terra’s hair. Satisfied, he placed the brush back on the bedside table.
“I’ll leave you two,” he said.
Alexandra smiled at Pete as he exited out into the corridor. After the man left, she crouched down in front of Terra, steadying herself on the armrests of the wheelchair. She looked up into Terra’s serene face. The old woman meant a great deal to her. She was the last link with Alexandra’s past. The imminent loss of Terra left Alexandra feeling empty and alone. Tears started to roll down her cheeks at the thought of it.
“Mouse,” Alexandra expressed, “Anastasiya says that she’s had visions. She says you’re in there. I mean really in there. That you’ve contacted her.”
She locked eyes with Terra for a moment, and analysed her gaze. Could there be genuine hope? Terra began to weep, but the silence of decades remained unbroken. Alexandra sighed, leaned forward until their foreheads touched, and then the two closed their eyes. In the tenderness of the moment Alexandra was certain that she felt a plea conveyed from her old friend. Save me.
“Your mother had such awesome expectations for the two of us,” Alexandra whispered, “and her intuition was always bang-on. Maybe it can all still happen.”
Her eyes opened and she moved back as her friend watched. She caressed the side of Terra’s face and, with a magician-like turn of hand, removed a coin from Terra’s ear. The trick evoked a faint smile. Alexandra straightened, wiped her tears, and moved behind the wheelchair.
“I have a lot more redhead jokes,” she said, as she grabbed the chair’s handles and started to wheel Terra out of the room.
Terra slowly looked back toward her, glared, then turned forward again and huffed.
“…’Cause I know how you love redhead jokes.”

What initially got you interested in writing? People reacting (positively) to something that I have created. With a slightly different bent and skillset, that desire could just as easily have led to music or visual arts, but I have always been drawn to, and impressed by, great stories and a savvy turn of phrase.

What genres do you write in? Literary and fantasy sci-fi

What drew you to writing these specific genres? Literary writing brings out the wordsmith in me while fantasy sci-fi opens the flood gates of my imagination.

How did you break into the field? I self-published my novel “Pairs”.

What do you want readers to take away from reading your works? An overall upbeat experience.

What do you find most rewarding about writing? When someone who has read my work recounts a scene or character to me as if I was hearing about it for the first time. That was an engaged reader.

What do you find most challenging about writing? There is nothing about the act of writing that I would say stands out as a particular challenge. This is not to say that the process runs perfectly smoothly all the time, quite the contrary. Sticking points simply vary from day-to-day. In one instance it can be describing a scene to my liking and in the next it can be finding the perfect word or putting together a natural sounding stretch of dialogue.

What advice would you give to people wanting to enter the field? I won’t call it advice. I will label it considerations. 1) Think about whether or not you simply want to be a writer or whether you want to write. There is a difference. Are you prepared to put in the work or are you simply captivated by the notion of being an author? 2) When starting out, pick an easily identifiable genre and nurture it before expanding.

What type of books do you enjoy reading? Well written. I’m not being facetious. I make an effort to keep my reading eclectic.

Is there anything else besides writing you think people would find interesting about you? Nope. My interestingness peaks at being a writer.

What are the best ways to connect with you, or find out more about your work? I welcome being in touch. The central hub is my author website: dwrichardsauthor.com. All my coordinates are there. I also maintain a site specific to the Alexandra Forever Project: alexandraforever.com. On most social media I am @A4EProject. 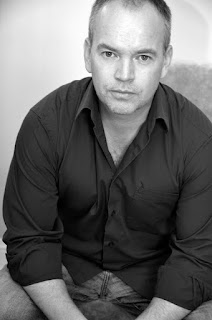 D.W. Richards first introduced the protagonist, Alexandra, to the
world in his novel, “Pairs,” which spent two weeks on the Amazon U.K.
Best Seller list for humor. Alexandra’s story continued in the graphic
novel, “Alexandra Forever: 2337”. In addition to creative writing, D.W.
Richards has a Bachelor Degree in Psychology from Carleton University
and is a Certified General Accountant.