BLOG TOUR – Asbury High and the Parcels of Poison 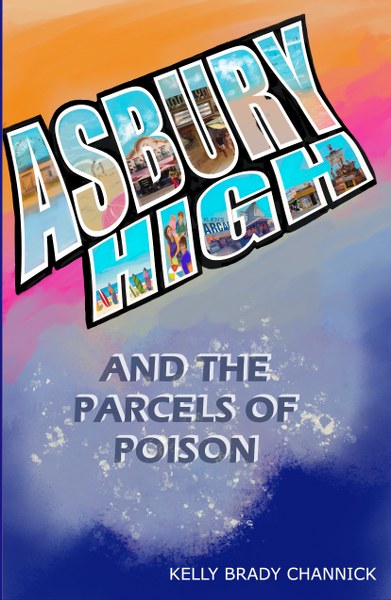 Asbury’s fearless foursome are back! Is their favorite restaurant to blame for customers falling ill? Or is there something more sinister at work?
After an unprecedented first year of high school, the gang is ready for a relaxing summer vacation, although in Asbury that may be easier said than done. This summer, the Food Network is running a summer special highlighting local hot spots; Carly, Maddie, Pilot and Cornelious are psyched to have the world’s best restaurant featured – their very own Brady’s! In fact, Maddie can almost forget that her arch-nemesis, Alexis Johnson, will also be on TV for winning the logo design for Caulfield’s Candies… almost.
However, after patrons start falling ill, rumors of food poisoning cause many to point their finger at Brady’s. When Brady’s threatens to close it’s doors, Pilot realizes his mother’s job is in jeapordy, as well as his future in Asbury. With the aid of Cornelious’ wealthy cousin Dane, who spends every summer with the quartet, the gang is once again thrust into an investigation. Unfortunately, they find themselves thwarted by both the local police (who believe their recent success was due to luck rather than skill), and Cornelious’ father, who has decided to run for Mayor of Asbury and cautions his son on the need to maintain a spotless public image.
With a new pancake house on the boardwalk, Mainlanders invading their beaches, and the Pitbulls sneaking around and terrorizing shoobies (as usual), there’s no shortage of suspects. But can they solve the case before the summer, and Brady’s, are finished?
**Only .99 cents!**
Goodreads * Amazon

Asbury, although a haven to shoobies (tourists) in the summer, is a divided coastal town. With the rich half living in the East, and the rest living in the West, most friendships stay within their boundaries. Luckily for a spunky-smart tomboy, a clever billionaire athlete, a gossipy-in-the-know cheerleader, and a wrong side of the tracks technological genius, boundaries are a foreign concept. In fact, Maddie, Cornelious, Carly and Pilot have been Asbury’s strongest quartet for years, despite their vast differences. Nevertheless, after a few weeks of starting high school, the foursome’s friendship is tested.
After a string of burglaries in East Asbury, the gang decides to solve the crime as a reason to make time for each other. The further they investigate, the more they find themselves constantly side-stepping tweedle-dee and tweedle-dum-like policemen, outsmarting local bully JB and his gang of misfits, and dealing with Cornelious’ billionaire father and Governor—who has disapproved of his son’s choice of friends for years. In addition to these obstacles, the foursome must also adapt to their evolving friendship with each other and their peers.
With upperclassmen, teachers, and teammates vying for their attention, the gang must work even harder to root out the red-herrings from the true thief. Aided by Carly’s gossip, Maddie’s boldness, Cornelious’ quick-wit, and Pilot’s knack for technology, the gang soon discovers its edge over the local police department.
**Only .99 cents!**
Goodreads * Amazon

Hi! I’m Kelly and I became an author because I was born to tell stories. For as long as I can remember (and my past teammates, friends and family can attest to this), I’ve LOVED making up stories and using my crazy imagination. Plus, I talk a lot— ask my handsome husband! I was lucky to grow up in South Jersey, where going to the beach was a five-minute ride over the bridge and summer meant going on my best friend’s boat to tube or water ski whenever I wanted. Although I never said no to boating or swimming, I mostly enjoyed ‘traditional’ sports, like soccer and basketball and even played softball until eighth grade. Basically, sports and action are in my blood.

When I was looking to college, I was torn between majoring in criminal justice or education. Growing up, I had always dreamed of being an FBI Agent and going on crazy missions— I even would check the physical test and guidelines each year for making an agent and was proud to day I could’ve passed it easily. However, my cousins’ neighbor was a retired agent, and after learning that most of the job entailed paperwork and desk duty, I knew that wasn’t for me. But, I never stopped daydreaming of missions and mysteries, which led me to write out what I envisioned. After teaching for five years— ranging from first to eighth grade— my husband, Ryan, and I decided to work towards having a family. After the birth of our BIG little man, I realized that if I didn’t push myself to publish now, then I probably never would. With encouragement from Ry, I went full steam ahead.

I can forgive people most things and feel it is unhealthy to hold grudges or get mad over trivial things. However, there are three things that honestly make me cringe.

I was born in Somers Point, NJ, but moved and grew up in Upper Township— right outside Ocean City, New Jersey. Honestly, I wouldn’t have wanted it any other way! I got to have all of the perks of living by the shore, without having to live in the actual busy and overcrowded summer town. Although, I did work on the boardwalk each summer (Bashful Banana, extremely delicious and healthy foods, a must-stop-at destination if you’re ever in town), and attend OCHS. However, living on the other side of the bridge enabled me to have an actual yard and much more space to play around and make up games as a kid, with the best neighbors ever— HI DIEROLF FAMILY!!

I work out! I consider myself a lifelong athlete, even though my sports careers are finished—well other than for fun in pickup games or rec leagues. In fact, I was even my high school’s (GO OC!) most athletic and female athlete of the year. Therefore, it is obvious that running and being active is something I have always enjoyed and will continue to do so. Getting outside in the fresh air, and running around by myself or with my husband, son and two dogs (never a dull moment here) or playing games, does more for my mind than anything else. Especially if I find I am having a hard time finding the right words to say, or rather write.

How to find time to write as a parent?

As a new parent (our little man is only seven months old, as I write this), this proved to be more difficult than I originally thought. However, during both of our big boy’s naptimes, each are an hour and a half, I sit down in front of my computer with a tall glass of milk— the only drink I drink— and just start typing or writing out ideas. I have found that once I start, I just keep going. As a collegiate and lifetime athlete, I believe wholeheartedly that if you do something every day, for long enough, it becomes habit. One of my best friends, for whom one of the characters share the same last name (Gibbz!), is very motivational and definitely a glass-full type of person. After I decided to go ahead with the decision to get my books published, she would text me every day and ask: “Did you write today?” The rest is history!

For as long as she could remember, Kelly Brady Channick loved making up stories, and leaving her listeners/readers on the edge of their seats.
Perhaps that’s why she always managed to talk herself out of trouble…
After graduating from NJ’s own Ocean City High School, Kelly accepted a basketball scholarship to Holy Family University, in Philadelphia. As a lifelong athlete, Kelly understands the importance of teamwork and overcoming adversity, something she hopes translates into her books.
Before writing page-turners, she taught first, fifth, sixth, seventh and eighth grade — like a dessert menu, she simply had to test them all out. But her favorite job is the one she’s now doing full time: writing. Kelly loves to craft whodunit mysteries, leading readers through various twists and turns filled with red-herrings, hidden clues, and more peculiar characters than a reality show.
Kelly lives in South Jersey with her handsome husband, energetic baby boy, two cookie-stealing dogs, and an awfully smart cat.
If you want to know when Kelly’s next book will come out, please visit her website at http://www.kbchannick.com, where you can sign up to receive emails providing updates for new releases, or contact her directly, as well as win fun giveaways, and receive up to date news.
Website * Facebook * Instagram * Bookbub * Amazon * Goodreads