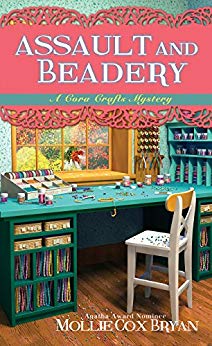 All of Cora Chevalier’s dreams are coming true. Since moving to Indigo Gap, North Carolina, the busy crafting maven has been blessed with a great boyfriend, a lovely home, and a booming craft retreat business. But on the eve of her first Crafty Mom’s Escape Weekend, tragedy strikes again in Indigo Gap. This time, it’s curtains for Stan Herald, the disagreeable director of the local theater group, who’s murdered on the opening night of their new production. Worse, Cora’s friend Zee is accused of the crime.

Cora is determined to prove her friend’s innocence, but Zee’s mysterious past is making that difficult. And with a list of suspects longer than a double spool of satin cording, getting a bead on the real culprit won’t be easy. With her friends Jane and Ruby at her side, Cora must string together the clues and solve Stan’s murder before the killer gives an encore performance.

I’ve always been fascinated by the tale of “The Little Beggar” in the Arabian Nights stories. Or should I say I’ve been fascinated by the mechanics of that old story and wondered how you could make it work in a contemporary tale. If you’re not familiar with the story, it’s about a couple who invite a beggar to dinner and think they’ve killed him, so they take his body and to the doctor, and due to a series of well planned events and odd characters, several people end up thinking they’ve killed him. And none of them really have. In fact, he’s alive. He’s just fainted due to a lack of oxygen—a bone in lodged in his throat from the dinner he ate with the original couple in the story.

So after giving it thought, I wondered if a writer could take that same plot and rework it a bit and make it work in a contemporary mystery. The answer is if that exact element could work, I have no idea how. Because of modern medicine, we’d know if someone was dead. And for the confusion to happen time and time again, with bystanders thinking they had a part in a murder? The modern reader would never buy it. And modern characters would be reluctant to play along.

But a glimmer of a modern story could start there. It’s one of the things that’s inspired my newest book “Assault and Beadery,” which is a contemporary crafting mystery set in the mountains of North Carolina. What on earth could it have in common with “The Little Beggar?” I’ll leave that to my readers to ponder. 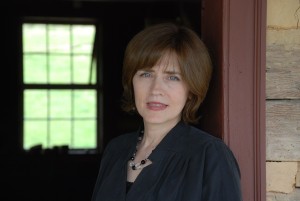 Mollie Cox Bryan is the author of the Cumberland Creek Scrapbooking mystery series and the Cora Crafts mystery series. She is also author of two cookbooks, the regional bestseller Mrs. Rowe’s Little Book of Southern Pies and Mrs. Rowe’s Restaurant Cookbook: A Lifetime of Recipes from the Shenandoah Valley. An award-winning journalist and poet, she currently blogs, cooks, and scrapbooks in the Shenandoah Valley of Virginia with her husband and two daughters. Scrapbook of Secrets was nominated for an Agatha Award for Best First Novel. Visit her on the web at molliecoxbryan.com.

September 25 – The Power of Words = REVIEW

October 3 – Escape With Dollycas Into A Good Book – REVIEW

October 4 – I’m All About Books – SPOTLIGHT

October 8 – Here’s How It Happened – SPOTLIGHT