About Beware the East Wind 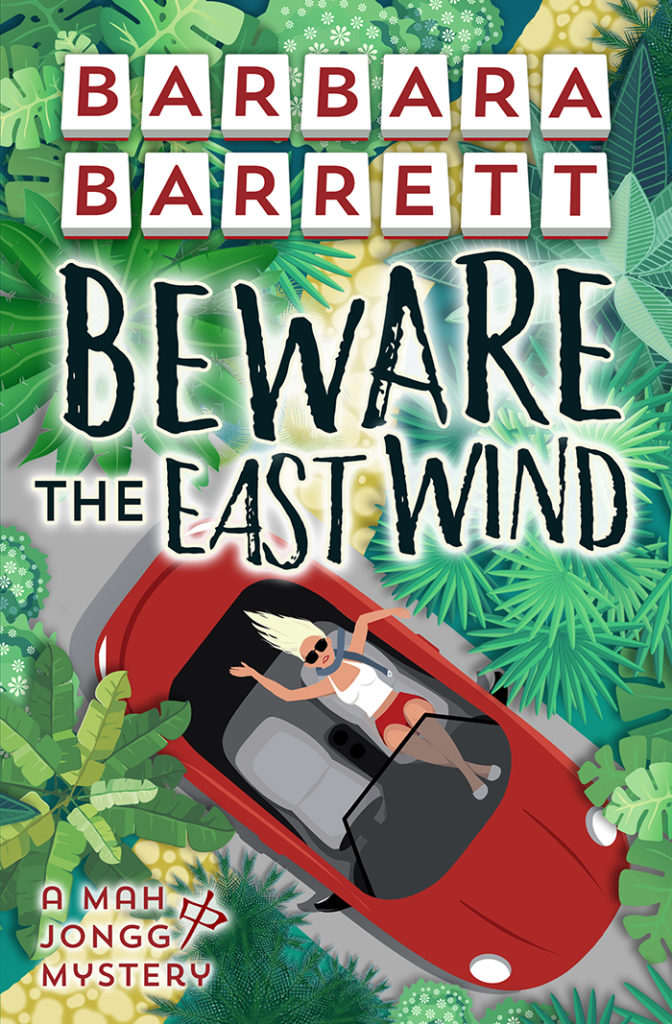 Beware the east wind! It’s hurricane season in Florida, and everyone’s attention is focused on preparing for the latest tempest. But in Serendipity Springs, mah jongg pals Marianne, Sydney, Micki and Kat are caught in a different kind of whirlwind—a mesmerizing murder case involving a slain hypnotist/chef and the woman police suspect of doing her in, her embittered catering partner, Portia.

The Story Behind the Story

One the most frequently asked questions I receive about my writing is, “Where do you get your ideas?” With this series, since I include a mah jongg term in every title, I tend to take my inspiration for the story from there. I want the plot to reflect the title, although I also don’t want to bend over backwards attempting to make it fit.

When I decided to use one of the Wind tiles in mah jongg in the title of my fourth book, I had my choice of any of the four directions. Think about it. Doesn’t each one suggest a different story line to you? The North Wind implies cold. Although it does get “cold” at times in Florida, the idea didn’t grab me. Nor did I get excited about the South Wind, although things “southern” might have been fun to pursue. The West Wind reminds me of the Wicked Witch of the West; that line of thinking could have been great for a Halloween-themed story. Maybe I’ll go back to one of those someday.

So, that left the East Wind. I googled “East Wind phrases.” To paraphrase, it tends to be associated with destruction or change, although I was reminded that it was an east wind that brought Mary Poppins to the Banks family. Maybe I should have just stuck with the word “wind,” because it offered more possibilities: any way the wind blows, get the wind up, run/ride with the wind and head wind, to name a few.

Since I live in Florida part of the year, what immediately came to mind was a hurricane. (This was months before the recent Dorian showed up on our doorsteps.) However, I didn’t want the subject of a hurricane to dominate. Although I waited for the approach of Matthew a few years ago, I’ve never been in the midst of or directly affected by one. I didn’t feel I could do justice to the fear and anxiety faced by those who have.

That’s why I turned to a different topic as the main premise of the story. Hypnotism. Not that I was familiar with that subject either, but it offered many dramatic possibilities. My Sisters in Crime-Iowa chapter featured a local hypnotist as our speaker last summer. With only forty-five minutes to present her information, it wasn’t like she could go in-depth, but she did give a brief demo, described how she used it as an entertainer (hypnotists are apparently very popular at high school graduation parties) and as a private consultant.

Every time I mention her presentation, I make it clear that the hypnotist in this book is not based on that speaker at all. Instead, she served as a springboard to creating a multi-layered victim. Imagine the possibilities offered by the many revelations she hears during client sessions when they are under hypnosis if she wasn’t totally ethical. That’s what I did. It’s too bad I had to stop with four, but I needed a manageable number for a cozy.

Then the real problem became how did I link this victim’s death with my four protagonists, since they had only seen her act once and had never met her. I needed a plausible suspect who would prevail upon them to investigate. That’s when I gave my victim a second career as a caterer, so her partner could be the first one suspected. However, in each of the prior entries in this series, a close acquaintance had come to my sleuths asking for their help. I chose to give her a brother who’d be that connection. The brother and Marianne were in the same one-act playwriting class. I probably need an organization chart to demonstrate these links.

Most of the plot was now in place except it was time to bring the husbands into the mix. Both had helped out in Book 2, Bamboozled, but now it was time to further explore their concern for their wives’ safety (and if they were honest with themselves, they wanted in on the action also). Their insertion of themselves into the mix adds another dimension to the investigation process.

I had the plot. Now I had to figure out the logistics. How do they identify suspects when they never met the woman? And since the suspects are most likely private clients, how do they even learn their identities when they’re supposed to be confidential? Enter the reason why the victim is both a hypnotist and a caterer so that her catering partner has access to the client files long enough to find several who might be willing to kill the woman to prevent the secrets they revealed under hypnosis from coming out.

However, since both the partner and these amateur sleuths aren’t supposed to know anything about the clients, they have to invent ways to approach the suspects without giving away what they’re doing. The stories they manufacture are too lengthy to go into here; that’s what the book is for. I hope you’ll check it out to see how successful I was in carrying off their undercover action.

Barbara Barrett started reading mysteries when she was pregnant with her first child to keep her mind off things like her changing body and food cravings. When she’d devoured as many Agatha Christies as she could find, she branched out to English village cozies and Ellery Queen.

Later, to avoid a midlife crisis, she began writing fiction at night when she wasn’t at her day job as a human resources analyst for Iowa State Government. After releasing eleven full-length romance novels and one novella, she returned to the cozy mystery genre, using one of her retirement pastimes, the game of mah jongg, as her inspiration. Not only has it been a great social outlet, it has also helped keep her mind active when not writing.

Bamboozled, the second book in her “Mah Jongg Mystery” series, features four friends who play mah jongg together and share otherwise in each other’s lives. None of the four is based on an actual person. Each is an amalgamation of several mah jongg friends with a lot of Barbara’s imagination thrown in for good measure. The four will continue to appear in future books in the series.

Anticipating the day when she would write her first mystery, she has been a member of the Mystery/Romantic Suspense chapter of Romance Writers of America for over a decade. She credits them with helping her hone her craft.

Barbara is married to the man she met her senior year of college. They have two grown children and eight grandchildren.

October 24 – I’m All About Books – SPOTLIGHT

October 26 – Here’s How It Happened – SPOTLIGHT

October 27 – Cozy Up With Kathy – REVIEW