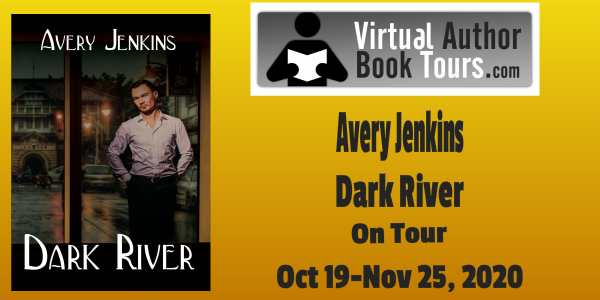 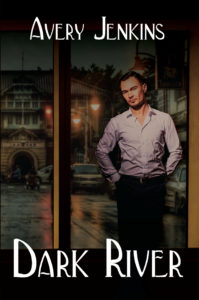 When your only path to survival is to die..

An old man loses all that he loves for a secret he doesn’t know he knows and a past he can’t remember while he searches for a girl’s killer.

Guest Review of the Book by Sal

Provided by the blog tour

‘Dark River’ by Avery Jenkins is both an intriguing thriller and an incredibly detailed factual novel that keeps you hooked right from the start and doesn’t let go.
Asa Cire, the main character, is an older man whose profession is “stuff.” Basically, he deals in the gray market. Objects, curiosities– he can find anything for the right person and for the right price.

Despite having a slightly shady job, he lives a pretty normal life in a small town where he runs a shop with a street-smart, witty young co-worker named Neveah.
Well, everything is normal until a mysterious woman shows up at his house one day, leaving before she tells him why she came. That night, Asa has a vision of a dead teenage girl while he is meditating that frightens and intrigues him.

Before long, Asa discovers that the girl is the subject of a cold case from twenty years earlier. Her killer was never caught. But how does Asa factor into this? And what of the indecipherable manuscript that comes into his shop? All these things are answered in unexpected ways in this whirlwind story.

This one definitely kept me guessing the whole time I was reading. Avery Jenkins has a talent for suspense and atmosphere that is unparalleled in the genre. I can honestly say that I’ve never read a book like this before and I couldn’t put it down.
Asa was a great character, quiet, stoic and intelligent. I was rooting for him right from the start and I absolutely loved his arcane knowledge of random things. It made for an excellent detective story and it perfectly added to the interesting and delicious atmosphere of this book. All of the stars for this one! I would love to read more by this author in the future.

I pulled up in front of Budgie’s house and turned off the jeep. The front yard was about the size of a postage stamp and only intermittently studded with grass. A child’s Big Wheel, faded from sunlight, lay on it’s side, and an aluminum softball bat lay half in the mud. Also laying half in the mud was a dog, a big one from the looks of it. There was a stake in the ground, and a chain hooked to its collar, and an overturned bowl which had been stepped on and was shoved half in the mud. The dog’s chain was long enough for it it to reach Budgie’s front door.

The door in question stood slightly ajar. If I had to guess, I would guess it had problems closing. The house itself needed a paint job, and dirty curtains hung from the upstairs windows.

Downstairs windows were equipped with venetian blinds; in the fading light, I could make out the dance of blue light from television coming from the window furthest to my right.

My eyes went back to the dog. He was just lying there. Alert. Probably angry. I know I would be if I were chained to a lie in a mud puddle. He wasn’t a short-hair, I could tell he had a coat.

Like a husky, but he didn’t have the eyes or build of a husky. He was longer. Taller. Meaner.

He’d be 100 pounds if he was well fed. He looked at me. His eyes gleamed eerily in the fading light.

Well, nothing for it, I thought, and got out of the jeep, keeping my eyes on the dog. As soon as he heard the squeak of the hinges, he jumped to his feet, staring intently. He couldn’t see me until I began walking around the front toward the curb, and his eyes jumped toward me.

Standing, soaking wet, I could see the ribs on his side, sticking out. He was hungry. He leaned toward me against the chain and growled, low. I could be dinner.

The last thing you do in front of any assailant, animal or human, is show fear. I stood still for a minute, letting my fear drop into the earth, get absorbed by the mud, and slowly but steadily began walking toward the house, keeping one eye – but only one – on the dog.

I was halfway there when the dog lunged. Only a growl betrayed his attack, and before he took the two steps to reach me, I turned, and with my arms wide and my hands open, just stood and looked into the dogs eyes. In my own mind, I made myself as large as I possibly could, looming over him with a fearless determination to match his attack.

He stopped. We looked at each other.

Years ago – how many, I can’t remember – I was walking through the woods in Canada, I think. I was in a bit of a hurry, why doesn’t really matter now, but I had two hundred miles of wilderness to cross. I was carrying little, just a rucksack, and I’d been out for eight days. Eight days since I had seen anyone, eight days of checking map and climbing ridges and skirting many small lakes. There was a certain lake that I was headed for.

It was mid-morning. I was walking through a virgin pine forest, trees 100 years old or more rising up as far as I could see. It was a little gloomy at ground level, but inches of needles lay on the soil, making my walk smooth, comfortable, and silent.

I stopped for a minute to take a rest, dropping my pack to the ground and just standing. After a couple of minutes, I saw something moving through the trees. It was a bear, slowly making its way on all fours, foraging its way toward me. I watched it, silently.

Black bears have miserable eyesight, and what slight breeze there was put me upwind. He walked closer and closer, until he was only twenty feet from me. I was holding my breath, being very still so no movement would betray me. Close to me, I could see he was huge. On his hind legs he would dwarf me, and if he weighed less than 600 pounds, I was a mutton chop. Which I might be anyway.

Ever so slowly, I twisted so that I could keep him in my sight. A twig snapped.

As poorly as bears see, their hearing make up for it, and his huge skull swung toward me. I looked at him. He looked at me. Our eyes locked, and all I could see in those eyes was wildness.

No fear, no anger, no sadness, no thought. Just pure, primitive feral being.

And then it happened. Suddenly, I was looking, not at him, but at me, from his eyes.

Everything was distorted, like they had auras around them, except for a keyhole of clarity through which I appeared in crystal-clear focus.

At the same time, I was overwhelmed by smells, the smell of the needles and earth, and was that fox scat I smelled, and then this, this strange, strong smell from what was in front of me. I heard a chipmunk run up a tree behind me, and the rustle of needles underneath the feet of a mouse a few feet away. And I knew, I felt, I breathed deep into and from that woods and then –

I opened my mouth, and with a voice that hadn’t seen use for a week, I said, “Well, good morning, Mr. Bear!”

At the sound of my voice, the bear turned and ran as fast as a bear can – which can peak at 30 mph in a sprint – and he was swallowed by the forest.

And here I was, staring at an angry, hungry dog. Neither of us moved, and then he tilted his head and looked at me with one eye and cocked ears, the way dogs do when they are trying to figure out where a sound is coming from.

I had an idea. I backed away from him, not taking my eyes off him, taking care not to slip in the mud. When I reached the jeep, I opened the door without turning around, and grabbed my half-eaten burger. I walked back toward the dog. He still looked at me like he couldn’t quite figure out what was going on.

“Here, pup,” I said. I squatted to his level, which to be honest, wasn’t that far down, and held out the burger to him. He took it, gingerly, then settled back on his haunches and gulped it down.

Probably the first food he’d had all day.

I turned my back toward him with confidence I didn’t feel, and walked toward the broken screen door. I could feel him looking at me from behind. I wondered if he’d ever had french fries. 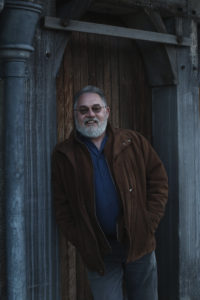 Dr. Avery Jenkins is a former award-winning journalist and essayist who took a 25-year break from the writing world to become a chiropractor and acupuncturist. He holds a 2nd degree black belt in the martial art of aikido and is in his final year of training to become a Daoist priest.

Dr. Jenkins lives in northwest Connecticut with his wife and two dogs of uncertain temperament.  Dark River is his first novel.

This giveaway is open to Canada and the U.S. only. This giveaway ends November 26, 2020,midnight pacific time. Entries accepted via Rafflecopter only.