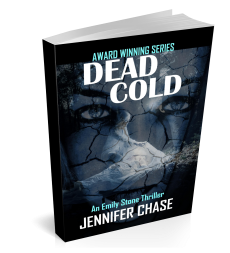 What happens when one California
community has a disturbing spike in homicides? It catapults cops into a deadly
game of murder. Frozen human body parts hideously displayed at the crime scenes
offers a horrifying interpretation that only a sadistic serial killer could
design—and execute.On the hunt for a complex serial killer, vigilante detective Emily Stone must
face her most daring case yet. Stone’s proven top-notch profiling skills and
forensic expertise may not be enough this time.

Young and ambitious, Detective Danny Starr, catches the homicide cases and
discovers that it will test everything he knows about police work and the
criminal mind. Can he handle these escalating cases or will the police
department have to call in reinforcements—the FBI.

Emily Stone’s covert team pushes with extreme urgency to unravel the grisly
clues, while keeping their identities hidden from the police. With one
last-ditch effort, Stone dangles someone she loves as bait to draw out the
killer. She then forces the killer out of their comfort zone with her partner
Rick Lopez, and with help from a longtime friend Jordan Smith. A revelation of
the serial killer’s identity leaves the team with volatile emotions that could
destroy them.

The killer continues to taunt and expertly manipulate the police, as well as
Stone’s team, and as they run out of time—they leave behind everyone and
everything—in Dead Cold.

I have always loved books for as long as I can remember. There really is no limit to the types of stories you can write and it’s something that I enjoy.

What genres do you prefer to write in?

I write crime thrillers and love the challenge of writing about police investigations and delving into the minds of psychopaths. However, the horror genre has been nagging at me lately, so that might be a possibility.

Are there any authors you prefer to read and why?

I’m a big fan of authors such as Dean Koontz and Jeffrey Deaver. Every time they have a new book released, I have to make sure that it’s loaded on my Kindle. One of the reasons I love Deaver is the Lincoln Rhyme series. It really made me want to be an author. Koontz has an amazing way that he creates his characters. They are so diverse and interesting.

How did you make the move into being a published author?

I didn’t start out my professional career as a writer. I spent a fair amount of time in the business world, but I never was happy. It was not until I had an experience with a violent sociopath that threatened to kill me for more than two years did I think hard about writing my first novel. You could say it was a shocking inspiration. I made the transition into writing novels and I have never looked back.

You can create your own world, even if it’s crime fiction. With my academic background in criminology and police forensics, I can take it and run with it. And, I can work in my PJs if I want to, which is always a plus.

Promotion and marketing is the most difficult part of being an author. Sometimes it makes me cringe just thinking about it.

Do you have any tips for writers who find themselves experiencing writer’s block?

I actually disagree with this concept; I don’t think there’s any such thing as a writer’s block. If you experience it, it most likely means that you don’t have a complete story and now you’ve become stuck. You need to go back and test your story theory. Outlining helps to alleviate this problem.

What advice would you give to people that want to enter the field?

Do your research about what it takes to publish and market your book to see if you’re really serious about it and willing to stay in it for the long haul. You will have difficulties, and at times, you will need a tough skin, but the rewards are amazing.

I want readers to experience a rollercoaster ride of their life, from being there right at the crime scenes with the police trying to figure out the crime puzzle and tagging along with the serial killer.

Is there anything else about you that you think readers might find interesting?

In every one of the books in the Emily Stone Thriller Series, I like to include an unusual forensic tidbit that most readers haven’t heard about to make the story a little bit more interesting.

ESCAPE WAS IMPOSSIBLE. TEARS STREAMED down her
face as she sat in the darkness and waited for the man to return. There was no
other choice—but to wait.
She hadn’t eaten anything in three days and had only a
limited amount of water—her strength continued to fade with every hour. With
her wrists and ankles secured with duct tape, her skin stung with pain every
time she struggled to move. At least the man had peeled the tape from her eyes
and mouth so that she could see something besides pitch-blackness.
Even if she could escape, the only way to safety was jumping
into the frigid water, but she could not swim and would drown before ever
reaching the shore.
The only thing thirteen-year-old Kayla Swanson thought about
was home. Fond memories flashed through her mind of her parents, her little
brother, and her dog Charlie. She was never going to see them again. Their
smiling faces were forever etched in Kayla’s mind, and she constantly held them
close to her heart.
The boat rocked, and seemed to sway more violently as the
tide flooded in and out of the harbor. Kayla could hear a consistent clanking
noise above her as the boat rolled back and forth. The sound had a hypnotic
quality, and kept her mind on something else besides when the man would return
and what he would do next.
Her lips were dry and cracked as she bordered on dehydration.
Even her tears dried on her cheeks, leaving her skin stiff and drawn. Her body
began to shake, not only from fear, but also because of the extreme exhaustion
and the constant dampness all around her.
The boat rocked more, but this time it shifted from the
opposite sides. Kayla heard soft footsteps above, which she knew wasn’t her
captor’s heavy walk. She strained her eyes in the darkness and thought she saw
a thin shadow stealthily move along the upper deck.
Was it a ghost?
Kayla remembered a television series where a team of people
hunted ghosts and they had said that ghosts could
occupy any type of space, house, property, and even a boat.
She blinked her eyes several times and hoped that she could
catch a glimpse of the ghost again. With every ounce of declining strength,
Kayla scooted her body closer to the narrow stairs leading to the upper deck.
Painfully craning her neck, she strained to see something up
in the darkness.
The dark shadowed areas played tricks on her eyes—it was
there, then it wasn’t.
She waited for several minutes.
Nothing appeared.
The only sounds she heard were the usual boat noises she had
grown accustomed to hearing. Whatever she thought she heard was gone now. It
was most likely her imagination trying to give her some hope and a few moments
break from her dire circumstances.
As she relaxed her shoulders and leaned back against the
wall, the reality of her world pressing down hard. Tears streamed down her
face. She tasted the saltiness that settled around her mouth. Her last moments
were approaching, and there was nothing she could do.

Jennifer
Chase is a multi award-winning crime fiction author and consulting
criminologist. Jennifer holds a bachelor
degree in police forensics and a master’s degree in criminology & criminal
justice. These academic pursuits developed out of her curiosity about the
criminal mind as well as from her own experience with a violent sociopath,
providing Jennifer with deep personal investment in every story she tells. In
addition, she holds certifications in serial crime and criminal
profiling.  She is an affiliate member of the International Association of Forensic
Criminologists.

Her
latest book is the crime thriller, Dead
Cold.