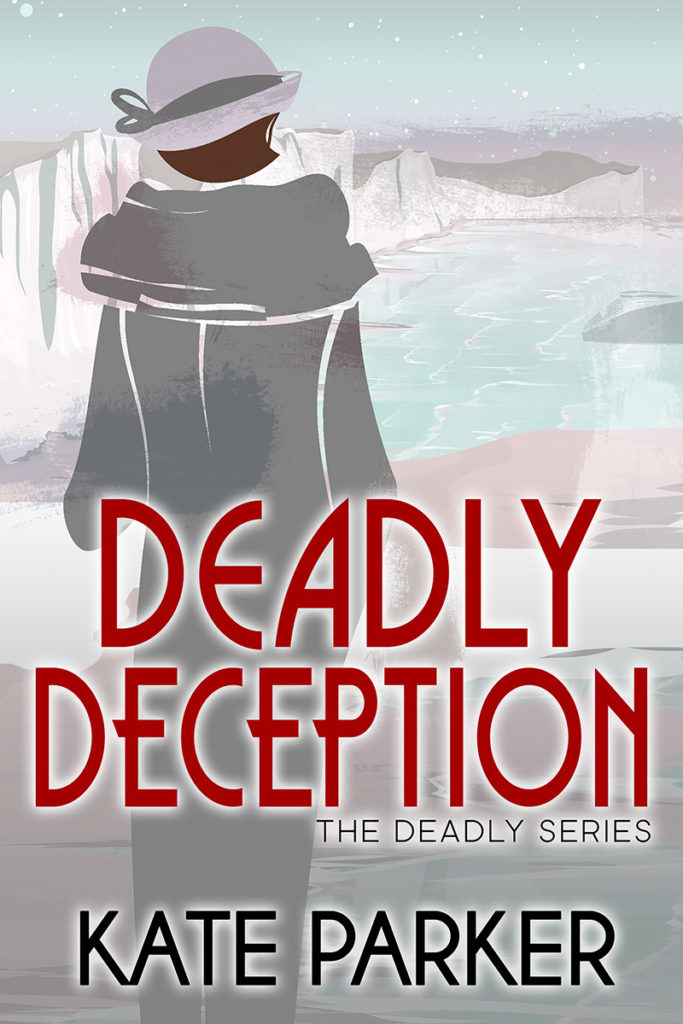 Everyone hides secrets. Some provoke murder.

Olivia Denis discovers her father kneeling over the body of a man…a man who supposedly drowned in the Channel years before. Olivia wants to ring for help, her father wants to hide the body, but a mysterious phone call brings Scotland Yard to the murder scene.
Olivia can’t stand by and let her maddening, disapproving father hang. To prove his innocence – and learn his secrets – she must work with a master spy. The search for clues takes Olivia to the continent and the Kent countryside, Hastings and London, pushing her deeper into the world of danger and deception.

As war between Germany and Britain stalks closer, the hunt for a Nazi collaborator intensifies. With a mounting death toll, Olivia knows she must unmask the killer or be the next to die.

Olivia and her father

Olivia Denis, the heroine of the Deadly Series, and her father, Sir Ronald Harper, have a tempestuous relationship. Olivia is an only child who lost her mother in the influenza pandemic at the end of World War I. Her father has a demanding job at the Foreign Office and had little idea what to do with a young girl. Men of that generation expected to be “distant” fathers, cold and aloof, just as their fathers had been.

Fortunately for both of them, it was becoming more common for girls of their class to be sent to boarding schools just as their brothers were. Olivia received most of her education at boarding schools, and this was where she met her lifelong friend, Esther Benton Powell. In Deadly Scandal, when Olivia is newly widowed and needs employment to have enough money to keep the flat, saving her from having to move back home with her father, it is Esther who puts in a good word for Olivia with her father, Sir Henry Benton, the newspaper publisher.

As a school girl, Olivia thought Sir Henry was the perfect father, loud, outspoken, willing to applaud Olivia and Esther’s theatrical efforts, and overlook their childish pranks. Sir Ronald, in contrast, was quiet, stuffy, and expected good behavior at all times. Olivia is thrilled when Sir Henry offers her a job as a reporter for women’s articles, with a secondary, secret role helping his late wife’s many relatives escape Hitler’s takeover of the continent.

Sir Ronald, Olivia’s father, is scandalized by her decision to take a job and live independently. Unmarried women in the 1930s, particularly in the upper-middle and upper classes, were expected to live at home and look for a husband. Olivia was married for three years before her husband was murdered. She would prefer to hold down a job, interviewing people and writing articles, rather than be bored living the life she had as a wife and living at home after university, attending a mind-numbing round of luncheons and teas.

For the first three books in the Deadly Series, Sir Ronald keeps telling Olivia to give up the flat and move home. This is what he believes society expects her to do, so he expects it as well. In the fourth book, Deadly Deception, Olivia is engaged to Adam Redmond, a captain in the British Army who is often away training for the war everyone expects will soon occur. At the beginning of the story, Olivia learns her father is inviting people to her wedding, even though she has yet to set a date. Her father frequently tells her to set a date and get married, so she will live up to his expectations, but she keeps putting it off. Olivia expects once the war comes, married women will be allowed in the workplace, especially women with useful knowledge. Olivia speaks three languages, has experience as a reporter, and has recently traveled to Nazi held territories. Until she can stay employed as a married woman, Olivia plans to stay single.

Then in Deadly Deception, Sir Ronald is found kneeling next to a work colleague with blood on his hands and Sir Ronald’s knife sticking out of the man’s chest, and he is arrested in what the police believe is an open and shut case of murder. As much as Olivia fights with her father, he is her closest living relative. She knows if anyone is going to prove him innocent of the crime, it will be her. And so an unwilling Olivia and Sir Ronald have to work together, which deepens their relationship.

The Deadly Series, including the latest, Deadly Deception, can be found in e-books and paperbacks at your favorite online retailers, including:

Kate Parker grew up in Washington, D C, spent several years along the Carolina coast, and now finds herself in the Colorado front range. All the time, she has been busy plotting to spend more time in her favorite city, London, where her books are set. So far, she hasn’t been able to build a time machine, so she has to visit historical sites and books to immerse herself in the details of life in bygone days.

2019 will see the publication of her fourth Deadly Series book, Deadly Deception, as well as a novella, The Mystery at Chadwick House. Chadwick House will both be for sale at the usual retailers plus given away to the readers of her newsletter. It is her first contemporary mystery. Later in the year, Kate plans on publishing the second Milliner Mystery. Her daughter has informed her this year she will also become the servant of a large, exuberant dog.

March 29 – Here’s How It Happened – SPOTLIGHT

April 2 – Escape With Dollycas Into A Good Book – REVIEW

April 4 – Cozy Up With Kathy – REVIEW