Today, we look at LIMBONIAN.

DISCLAIMER: This content has been provided to SHANNON MUIR’S INFINITE HOUSE OF BOOKS by YA Bound Book Tours. None of it reflects opinions of Shannon Muir. No compensation was received. This information required by the Federal Trade Commission.

YA Bound Book Tours is organizing a Blog Tour for: Limbonian (Vessel of Lost Souls #2) by Mikki Noble. This tour will run from September 16th to 20th. Check out the tour schedule below. 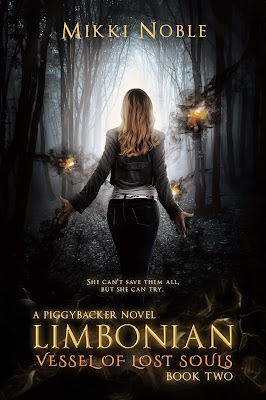 I am not completely useless.

Although, I feel like it lately. I lose more and more control over my emotions every day and I don’t know why. Is it because my best friend was murdered just steps away from me, or because my father has been taken? Maybe it’s because I had magic for about five minutes and lost it.

Everyone has a plan to follow. Me? Try to get my powers back or sit around waiting with my tail between my legs—and that’s just not going to happen. If getting my magic back is going to help my friends, then that’s what I have to do.

How do I fend off an anger that is so compelling and powerful it makes me forget just who the heck I am before I chase off everyone I love? How can I save two people I am destined not to? 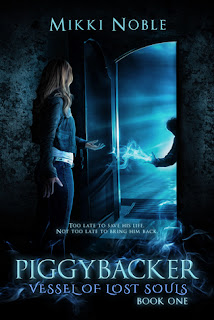 Piggybacker (Vessel of Lost Souls #1)
Summary:
Did someone say resurrection?Oh yes, it was the annoying voice in my head. We’ll trade, he said. I bring him back and he’ll help me figure out how I was stabbed and almost died. But I’ve only got a week or he will be lost forever, and then I’ll never find the truth.The part he failed to mention was that someone doesn’t want him to come back at all, and they’ll stop at nothing to see me fail. Freaking fantastic.How do I fight an unknown enemy, bring a boy back to life, and pretend to be normal? I mean, I can’t save anyone if I’m locked up for the rest of my life.Piggybacker is the first in Mikki Noble’s spell-binding Vessel of Lost Souls trilogy, and promises a thrilling adventure with powerful enemies, broken relationships, captivating magic, and two souls both caught up in a plot beyond any they could ever imagine.

“You
aren’t concentrating, Marley,” Gavin accuses me in his overtly annoyed tone,
looking down at me after he’d knocked me to the ground. My thoughts had
strayed. Again. When I look up into his big brown eyes, I want to forget
everything. All my troubles and worries and the fact that two people I loved
are gone. And I have to fight the fact that there is a very real possibility
that one or both of them are never coming back.

My uncle passed away when I was eleven. My family never wanted to talk about him because he took his own life and I guess it just hurt too much. My mother is the one who suggested I start writing. I started with poems; didn’t write my first story until 14 years later.

What genres do you prefer to write in?

YA (teen fiction) is my all-time favorite. I love writing anything paranormal. However, my muse—the wonderful being she is—throws ideas at me all the time. I never deny her.

Are there any authors you prefer to read and why?

I have my favorites in a variety of genres. Rick Riordan is my favorite in middle grade fiction. I admire his imagination. Elle Cosimano is another favorite. She writes teen. Great books, great writing. And I’m also a sucker for a good romance. Lori Foster and Christine Feehan are my favorites in those genres.

How did you make the move into being a published author?

I noticed that more and more people are self publishing. I met with agents who didn’t share my vision. I really wanted the freedom. I did research and voila. I bought books on publishing, talked to people I know in the publishing world and published. I’m still learning, still growing.

I love the fact that I get to tell stories it wasn’t always my goal, but I wouldn’t trade it for anything. The most rewarding part is creating people, people who feel real to me (and I hope to others).

Everything. *laughs* Everything is challenging in the world of writing; from the actual writing to publishing, formatting, blurbs, marketing. It is a very challenging career, but that just makes you work harder.

Do you have any tips for writers who find themselves experiencing writer’s block?

Get out of your own head. Sometimes us writers sit up there so long we chase the words away. Don’t worry, I had to learn this lesson myself. I wrote my first book, Piggybacker in 2013 and it took me until 18 to figure out the first chapter. I always hated what I’d written and rewrote it nearly a hundred times. One night when I was cooking dinner, the entire first chapter just came to me. I feel like that was because I had finally stopped thinking about it so much and let the answer come forth.

What advice would you give to people that want to enter the field?

I say go for it. Life is short. Give it a shot and see if you like it. It’s not an easy business, it’s terribly frustrating and it’s also the most fulfilling thing in the world. I love it and totally recommend it to everyone.

What do you want readers to take away from your works?

I hope they feel it was worth a read and that anything is possible.

Is there anything else about you that you think readers might find interesting?

I didn’t always want to be a writer. I actually wanted to be a singer, but I didn’t get that talent—like at all. *shrugs*

I’ve almost quit a hundred times over. When I was twenty, I stopped writing after I got my heart broken. It took me five years to realize that I missed writing and the rest is history.

Never give up on your dream. Sometimes dreams change though, and that’s okay, too.

As far back as she can remember, Mikki was creating characters and stories in her head. It wasn’t until fate brushed the tip of its wings over her eyes that she began to see that writing was what she was born to do. She loves animals, reading, everything supernatural related, and enjoys spending her free time on social media whenever she can.
Author Links: