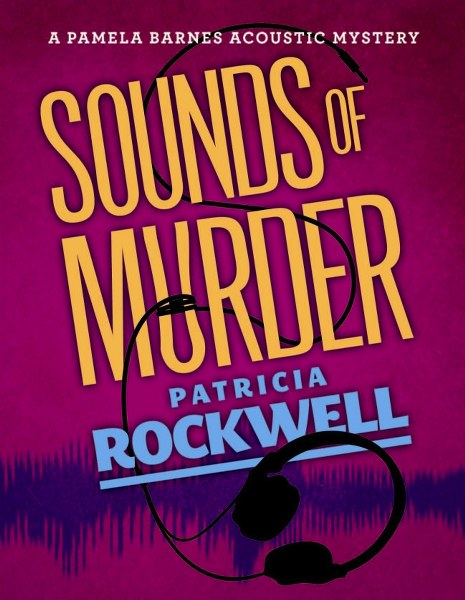 SOUNDS OF MURDER tells a tale of academic intrigue and death. At Grace
University, a small southern college, no one in the Psychology
Department likes Charlotte Clark, so no one is particularly upset
when she is found murdered in the department’s million-dollar
computer lab. But because she discovered the body, Associate
Professor Pamela Barnes feels obligated to find Charlotte’s killer.
When she discovers a recording of the murder that was accidentally
produced during Charlotte’s struggle with the killer, she begins
her own investigation.
Along the way, Pamela agonizes with her own conscience as she fights her
growing fear. She attempts to understand her mysterious Department
Chair, keep her curious colleagues informed, placate her protective
husband, and avoid antagonizing a local rube detective who belittles
her efforts–all while she struggles to make sense of the sounds on
the recording.
As she gets deeper and deeper into her analysis—trying to connect what
she hears in the recording with sounds from people (and potential
killers) around her–she gets closer and closer to the killer.
However, the killer is observing Pamela’s efforts and resolving to
stop her.
**Only 99 cents**
Goodreads * Amazon 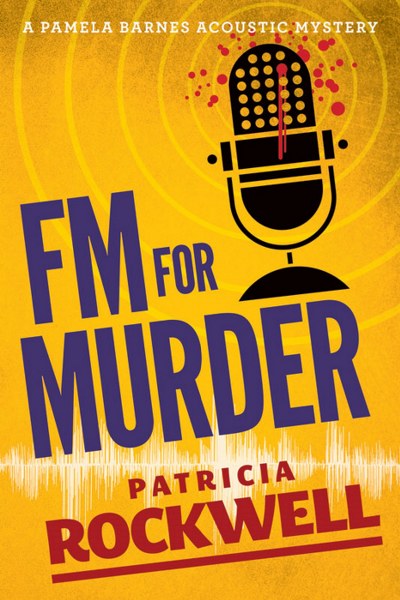 Who shot the disk jockey while he was on air? No one saw the killer, but
many heard the murder on the radio. Local police are mystified and
ask Psychology professor and acoustics expert Pamela Barnes to assist
them in investigating the crime. Can she determine who shot the
deejay just by listening to the radio station’s audio recording of
the killing? And how does this crime connect to the impending death
of a wealthy carpet manufacturer hundreds of miles away? And the
driven behavior of his conscientious son who hides a very important
secret? Unknown to Pamela, another thread of this strange mystery is
about to unravel. Will she be able to solve it before another victim
is claimed?
In FM FOR MURDER, the second in Patricia Rockwell’s acoustic mystery
series, we follow feisty amateur sleuth Pamela Barnes who doesn’t
let academic duties prevent her from fighting crime. And Pamela
fights crime with the tools she knows best—sound waves.
Goodreads * Amazon 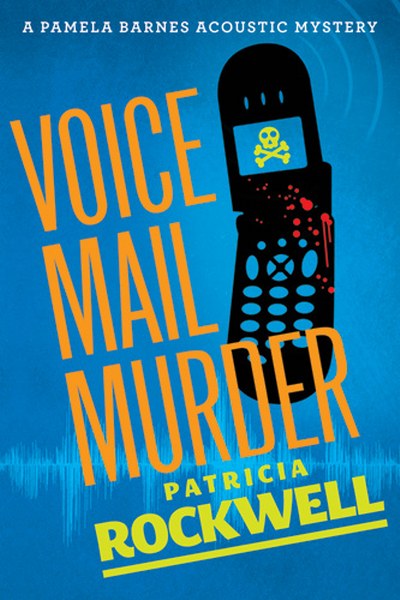 Sex! Knives! Voice Mail Messages!
Who stabbed the philandering football coach in the back? Was it one of
the three women who left romantic voice mail messages on the cell
phone found next to his body in the motel room?
The police don’t have a clue. None of the coach’s family, friends, or
colleagues recognize the voices of the unidentified women–and
probable mistresses. Who could they be? This sounds like a case for
Pamela Barnes, local Psychology professor, acoustics expert, and
sometimes amateur sleuth. Can she identify the three women (and
potential murder suspects) from just the sound of their voices on the
voice mail?
Who are these mystery women and how did the popular coach manage to
conduct affairs with all of them unbeknownst to everyone around him?
And how did he keep his trio of lovers from finding out about each
other—or did he? It’s a tangled romantic web that ultimately led
to murder and Pamela Barnes is determined to figure it out.
Goodreads * Amazon 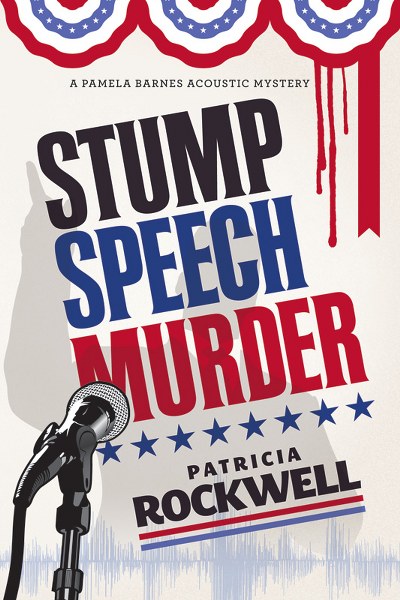 James Grant, a young politician with everything going for him, including
the most recent polls, gives a rousing stump speech in a local park.
His campaign for mayor against the entrenched incumbent looks
unstoppable. That is, until the police discover him standing over his
wife’s dead body with the murder weapon in his hands.
It certainly looks as if James is guilty. But psychologist and acoustics
expert Pamela Barnes has other ideas–and they include helping this
young man prove his innocence and succeed in his bid for mayor.
Can Pamela’s knowledge of sound help her find the real killer and
exonerate James? Or will this young politician’s most recent stump
speech be his last?
Goodreads * Amazon 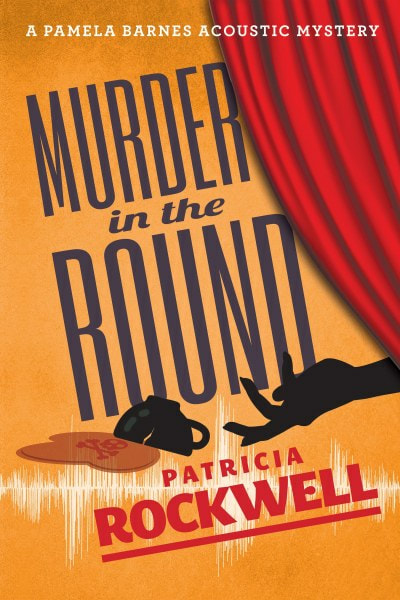 Murder in the Round
Pamela Barnes Acoustic Mysteries Book 5

A night out with her husband to watch her best friend perform in a
local community theater “in-the-round” production surely
shouldn’t be cause for amateur sleuth Pamela Barnes to use any of
her acoustic detecting skills. But when one of the actresses
collapses on stage and dies, Pamela finds herself in the thick of
things. The recorder in her purse making an audio copy of the
performance for another friend who couldn’t attend, may now prove
important when it’s determined that the victim was poisoned. Do the
sounds on the recording hold any clues to the identity of the
murderer? It looks like Pamela is on the sound trail again, and
she––and her pals in the Pyschology Department at Grace
University––will not stop until they find the person who
committed this murder in the round.
Goodreads * Amazon 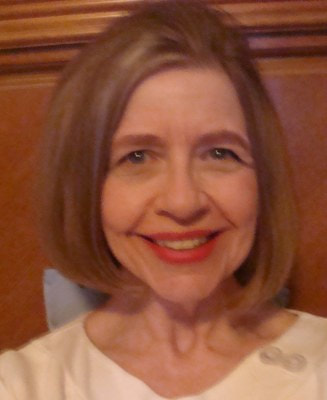 Patricia Rockwell is the author of the Pamela Barnes acoustic mystery series.
This amateur sleuth solves crimes using her knowledge of sound. The
series includes SOUNDS OF MURDER, FM FOR MURDER, VOICE MAIL MURDER,
STUMP SPEECH MURDER, and MURDER IN THE ROUND. Her new series, Essie
Cobb senior sleuth, features a 90-year-old assisted living facility
resident who solves mysteries. The books in this series include
BINGOED, PAPOOSED, VALENTINED, and GHOSTED. FIRECRACKERED, the fifth
in the series, will launch on June 25, 2016.
Dr. Rockwell has spent most of her life teaching. From small liberal arts
colleges to large regional research universities–and even a brief
stint in a high school, her background in education is extensive. She
has taught virtually everything related to Communication–from a fine
arts speech-theatre orientation to more recently a social science
research approach. Her Bachelors’ and Masters’ degrees are from the
University of Nebraska in Speech and her Ph.D. is from the University
of Arizona in Communication. She was on the faculty at the University
of Louisiana at Lafayette for thirteen years, retiring in 2007.
Her publications are extensive, with over 20 peer-reviewed articles in
scholarly journals, several textbooks, and a research book on her
major interest area of sarcasm, published by Edwin Mellen Press. In
addition to publications, she has presented numerous papers at
academic conferences and served for eight years as Editor of the
Louisiana Communication Journal. Her research focuses primarily on
several areas of communication: deception, sarcasm, and vocal cues.
She is presently living in Aurora, Illinois, with her husband Milt, also
a retired educator. The couple has two adult children.
Website * Facebook * Twitter * Amazon * Goodreads