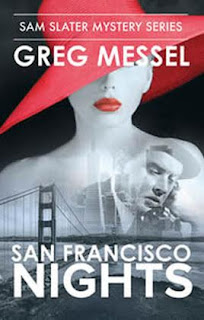 I can’t remember when I wasn’t interested in writing. I wrote stories as a child, I was on my high school newspapers and had a ten year career as a columnist, reporter and news editor at a daily newspaper. Writing fiction Is a very different type of writing from journalism but I think I’ve been able to adapt my skills.

I wrote three books about relationships and people overcoming adversity. Then I began the mystery series and just finished the seventh book in that series.

I’ve always loved mysteries whether it be books or movies. I love to create and mystery and then try to roll out the story in a suspenseful and interesting way.

Several years ago I began reading about self publishing which was just bursting on the scene then. Things have changed dramatically in the publishing world and the explosion of online literary blogs and book purchasing has changed everything. There are thousands and thousands of books which can make getting noticed a challenge but it’s a very exciting, dynamic environment.

I hope they enjoy mysteries as much as I do. It really pleases me to hear readers say they took my book on their vacation or to the beach to read. There are few thrills to compare to seeing someone line at a bookstore waiting to buy your book. One of the most touching notes I got from a reader is that she read one of my books to her husband while he was in Walter Reed Hospital recovering from wounds he received in Iraq. Wow.

The actual writing is wonderful. I like to make an outline and then let the story unspool. Sometimes it goes directions which surprise me and that is a real thrill. The creative process is my favorite and when you write you enter a different world—the one inhabited by your characters. When I finish a book there’s a bit of sadness that you won’t be visiting that world any more in your mind as you write.

It’s to continual to improve my writing and to keep the stories fresh and exciting.

Write the stories that are inside of you and don’t try to be someone you are not. Also get some professional help so that you are a well-edited book and a professional cover that will attract readers.

I enjoy mysteries but also history books. There are so many books I want to get to about historical events. I’ve recently read “Girl On A Train,” James Patterson’s “The Black Book,” John Grisham’s “Camino Island,” and am reading Michael Connelly’s new book, “The Late Show.” I believe it helps your writing to be reading good fiction while you are attempting to write good fiction.

I love baseball and movies, both of which I enjoy living in Seattle. I also like to run outside along the water front to Puget Sound where I live.

I have a newly redesigned web site which I’m very proud of at www.gregmessel.com. I also have an author page on Amazon and Goodreads.

The wife of a wealthy San Francisco shipping magnate leads a secret life but someone is
threatening to expose her.  Private eye Sam Slater and his wife and
partner, Amelia, meet a mysterious woman in a large red hat during a train
trip. The woman approaches him pleading for help because she‘s receiving
anonymous notes quoting Bible verses which are becoming more and more ominous
with each passing day. Her secrets have been discovered but by whom? What
really happens behind closed doors in Room 505 in a swanky downtown hotel?
Sam is willing to take the case
but Amelia warns that this woman is nothing but trouble. What does the woman
really want? She’s been watching Sam for months and has a scheme to pull him
into her world.
Find out in the latest Sam Slater
Mystery “San Francisco Nights” set in the fall of 1959. It’s the seventh book
in the series but is a heart pounding stand alone whodunit.
Watch the book trailer at YouTube.

ORDER
YOUR COPY AT AMAZON

The neon lights of the slumbering
city gave the streets an eerie blue and purple glow in contrast to the dark
store fronts. The three story brick office building was abandoned and the
normally bustling street at the entrance to San Francisco’s Chinatown was quiet with only an occasional dark solitary figure
walking by. The ancient black metal fire escapes seemed to cling to the facade
of the building like an alien spider web.
The interior of the building was
dark except in the private eye’s office on the top floor where a single desk
lamp provided the only circle of illumination against the thick blackness of
the night. The lamp provided just enough light to brighten the frosted glass on
the door with the name “Amelia Slater” on it.
Amelia sat at her desk in the
dimly lit office shuffling through some papers, but she was unnerved and having
trouble concentrating.  She took a drag on her cigarette before placing it
on the rim of the ash tray. The rising smoke appeared blue as it swirled lazily
into the air.
She suddenly stopped, thinking she
heard a sound. After intently listening for a few moments, Amelia concluded her
imagination was playing tricks on her. She turned her attention back to the
items on her desk but was interrupted again by a prolonged squeak of the outer
office door opening.
Then Amelia heard the outer door
softly closing, followed by the sound of quiet footsteps on the hardwood floor.
The sound seemed to stop just outside the door to her office.
Amelia could see the intruder’s
silhouette through the frosted glass window. Her eyes were riveted on the door
as the door knob to her office began to slowly turn. 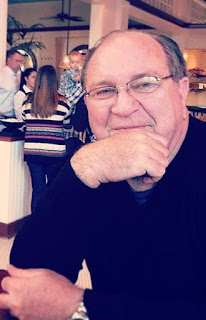 Greg Messel has spent most of his
adult life interested in writing, including a career in the newspaper business.
He won a Wyoming Press Association Award as a columnist and has contributed
articles to various magazines. Greg lives in Edmonds, Washington on Puget Sound with his wife Jean DeFond.
Greg has written ten novels. His
latest is “San
Francisco Nights” which is the seventh in a series of mysteries set in
1959 San Francisco. “Shadows In The Fog,” “Fog City
Strangler,” “San Francisco Secrets,” “Deadly Plunge”
are sequels to the first book in the series “Last of the Seals.” His
other three novels are “Sunbreaks,” “Expiation” and
“The Illusion of Certainty.” For a more detailed summary of Greg’s
novels go to www.gregmessel.com
Greg is currently working on his
eleventh novel “Dreams That Never Were” which is not part of the
mystery series. 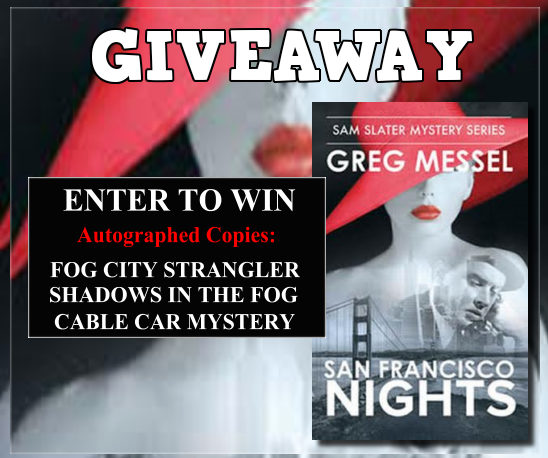 Greg Messel is giving away three of
his books!!