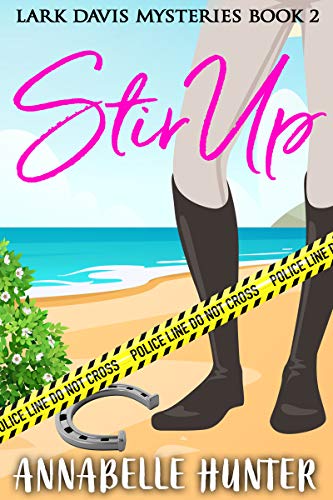 Peace and quiet is underrated.

After her last brush with murder, Larklyn Davis is relieved to be spending her time with the talented new horse at her stables instead of tripping over body parts. While she’s trying to figure out why her newest horse has lost his mojo, she’s also puzzling over her relationship with the brooding, uncommunicative Detective Brecken Wilson.

But then, disaster strikes, and both Lark’s reputation and business are on the line. Once again she finds herself pulled into a murder case and in close proximity to the handsome Detective. Throw in a dashing veterinarian plus a matchmaking town and Lark’s life spins out of control. As clues pile up and all evidence leads back to her barn, Lark gets saddled up to solve another mystery.

Who knew life in Barrow Bay would stir up so much trouble?

Where do Characters come from?

I’ve notice that one of the things people always want more information on is how authors come up with characters. I’m sure that for each person, the answer is different, but here is mine: I have no idea.

None. Not even a little bit.

Where did Lark come from? I know the answer is literally my mind. I mean, I wrote them. The words are mine. The phrases and vocabulary are mine. As I wrote, some part of me developed the character and filled in her story. The idiosyncrasies, her humor, her personality, all came from my mind. But how? No clue.

Lark is her own person, even in my head. When I’m writing, I’m doing no more than documenting her stories and emotions. Which frankly worries me. I mean, that sounds crazy, right? I have voices in my head that talk to me and derail outlines without any care to my carefully thought out plans. For those of you that are wondering… no, it isn’t crazy. I checked.

But I’m in control, right? Nope. Not at all. Well, maybe a little. I design the murder and so far the murderer has done what I want… no, that’s a lie, too. Okay, I have a loose influence on the plot line. I’ve also had characters that changed huge parts of their character without telling me until the words are on paper. I’ve had a short story where the ‘hero’ came in and turned out he was actually the gay best friend the whole time. Talk about a surprise. And once they make these decisions, I can’t change it. He was, forever after, the gay best friend. They are who they are, and trying to make them be what you want makes them come off fake. Goodbye, carefully planned out hero with a great back story. I’ll miss you. Hello new hero.

Here’s what I do know. The character isn’t fully formed on the first pass. When I put down the first draft, there is an outline of the character. I knew Lark was sarcastic and blunt. That she was fearless, but also very logical. That she had confidence bursting out of her. That she liked coffee. I knew all of these things. But the details came in the second or third draft. Her panic. Her quips. Everything was smoothed out into a character that hopefully jumps off the page and into the reader’s mind.

So if you’re designing a character, know that the first draft won’t being the end all. It’s just you and the character getting to know each other. Depth comes later. Don’t worry about the details, just get to know them. Let them develop the way they want to. Torture them a little and see what they do. Then fill in the details.

How do you write a good character? You listen. You write. You let the voices in your mind free. And don’t worry about what people might say about those voices. Hopefully it they are going to share your brain, they will make you laugh.

But most of all, you write.

Annabelle Hunter is a stay-at-home mom and an avid fan of classic mystery shows and dressage. She lives in Southern California with her husband, two children, and too many animals.

August 12 – Escape With Dollycas Into A Good Book – SPOTLIGHT

August 24 – I Read What You Write – SPOTLIGHT