Check out my stop on the blog tour for The Ashes (The Feud Trilogy #3) by Kyle Prue! 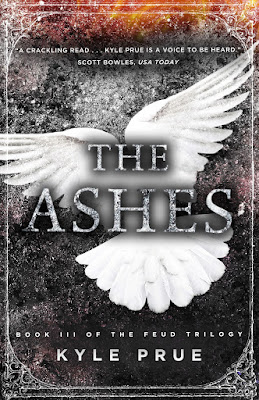 His fate has been foretold. Unless he can accept his destiny, the nation will fall to its doom.

Teenage warrior Neil Vapros has been captured. Imprisoned at the hands of the Empire, he’s forced to stage a daring breakout to return to his loved ones. But as he smashes the chains, he uncovers a shocking truth…

On the run and desperate to escape his fate, every attempt to resist the prophecy leads to more death and chaos. And now Neil understands that the only way anyone will live is if he embraces his own demise.

Will Neil pay the ultimate price to ensure freedom for all?

The Ashes is the thrilling conclusion to the award-winning Epic Feud Trilogy. If you like edge-of-your-seat action, gripping suspense, and explosive battles, then you’ll love Kyle Prue’s riveting finale.

Buy The Ashes to join the revolution today! 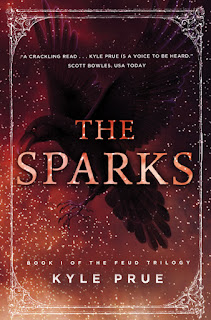 The Sparks (The Feud Trilogy #1)

Release Date: January 31st 2017
Summary:
One teen assassin-in-training must unite three warring supernatural dynasties before death comes to them all…
Find out why USA Today calls The Sparks “a crackling read” that “builds a vivid world (both) otherworldly and relatable.”
Neil Vapros just wants to make his father proud. The sixteen-year-old aspires to serve his family as an assassin, but he nearly dies in the process. As if that wasn’t bad enough, Neil’s family, as well as two rival dynasties, have abandoned an ancient promise to protect their city. An unknown evil has begun hunting all three houses from the shadows…
As Neil’s relatives fall one-by-one, he attempts to unite the three supernatural families against a common enemy. But earning trust after years of assassination attempts could prove impossible. Neil’s fight may involve more than a bloodthirsty empire, as betrayal rears its ugly head…
The Sparks is the first book in the award-winning Epic Feud trilogy of young adult fantasy novels. If you like captivating characters, inventive world building, and supernatural battles, then you’ll love Kyle Prue’s action-packed coming-of-age tale. 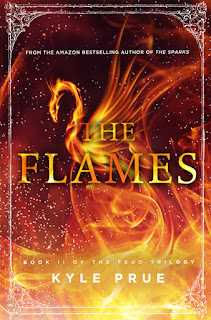 The Flames (The Feud Trilogy #2)

To survive incredible odds, one teen may have to trust both his former enemies and his fire-forged destiny…

Neil Vapros is one of the last free warriors of the great city of Altryon. He and his brother’s only chance of staying alive involves trusting an uneasy alliance with their former enemies. But in the world beyond his city’s walls, Neil’s life is much more dangerous than he ever imagined possible…

The Emperor has hired a ruthless madman and a vicious pack of assassins to hunt down the last supernatural survivors. As the allies attempt to hide from their enemies, the leader of a rebellion singles out Neil as the answer to a prophecy. Neil isn’t sure he believes he’s been “chosen,” but he knows one thing for sure: their only chance for survival lies in sticking together. While treachery and pain wait around every corner, Neil and his allies may win the day, but victory without casualties could prove impossible…

The Flames is the second book in the award-winning Epic Feud trilogy of young adult fantasy novels. If you like rich fantasy settings, imaginative supernatural abilities, and tough-as-nails characters, then you’ll love Kyle Prue’s electrifying adventure.

The Sparks (FREE through the 20th): 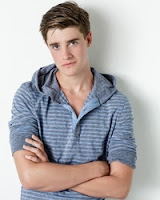 About the Author
Kyle Prue is an award winning author, actor and comedian. Kyle wrote The Sparks: Book One of the Feud Trilogy when he was just 16 years old. Kyle spent a gap year before college on a national book tour visiting over 100 middle and high schools and meeting over 80,000 students. Kyle is now a student at the University of Michigan, studying acting and creative writing. He still visits schools and is a keynote speaker for conferences.
Kyle is the founder of Sparking Literacy, a non-profit dedicated to lowering the high school dropout rate by inspiring teens to read, write and follow their dreams. An actor and comedian, Kyle trained at Second City Comedy Club in Chicago, where a number of SNL actors have gotten their start.
The Sparks has won numerous national awards including Best Book and Best Fiction for Young Adults 2015. The Sparks was runner up for Best Young Adult Fiction at the Florida Book Festival and won Honorable Mentions at the New England Book Festival, Midwest Book Festival, Southern California Book Festival, the International London Book Festival and won a prestigious Indie Fab award. Kyle also won an International Moonbeam Award for Best Young Author. The Flames won the FAPA Presidentiial Gold Medais for Best Fiction and Best Fantasy 2017.
Learn more at www.kyleprue.com and www.sparkingliteracy.org.
Follow Kyle:
Facebook: www.facebook.com/KylePrue
Twitter: www.twitter.com/@KylePrue
Instagram: www.instagram.com/KylePrue
GIVEAWAY: