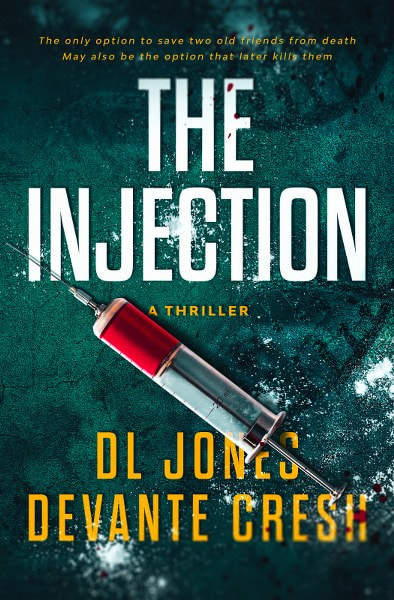 The only thing to save two old friends from death may also be what kills them.
Mr. Peters is a successful business owner. Other than dealing with a recent rash of break-ins, he lives a very satisfying life. That was until a childhood friend and brilliant scientist paid him a visit.
While the two friends had a troubled past, not speaking for ten years, the reunion was a happy one. That happiness quickly took a wrong turn as their lives are threatened.
Now held captive, the use of an experimental drug was the only option. A top-secret drug that enhanced a person’s will and physicality is the only thing giving them a fighting chance.
However, there are deadly side effects. Along with enhanced abilities comes a decrease in mental stability. Moreover, there is more to the kidnappings than first thought.
Will the two childhood friends maintain their sanity long enough to survive?
**Only .99 cents until Nov 3rd!!**
Add to Goodreads
Amazon * Books2Read

I was born in Brooklyn NY. I lived in Brooklyn then Queens (Queens village). When I was in around the 7th-8th grade, My family moved to Newport News Virginia. About 10 years ago I moved to Charlotte NC. My first memory of writing was when I was in, I’m guessing 6th grade, My family still lived in NY at the time. The school I went too had a class period after lunch where students would have a free period. Well, it wasn’t free, you had to come up with something educational to work on. Most people just took a nap. I think it was a way to give the teachers a break.

I partnered up with another guy in the class and we would write these stories. He and I both liked to draw so we wrote these books called “The Derrick Brown Mysteries” We would write stories and draw pictures to go with them. I don’t remember anything about them. Other than the character and that it was a kid that wet on adventures etc.

I started writing my first book in 1998. I had no idea what I would do with it. Of course there was no self publishing as it is today so I was just writing it just to be writing. It was sort of a mystery thriller. A man that didn’t believe in love falls in love but the whole thing was a plot to clean out his business and bank account etc. I wrote on that book for 10 years. Id pick it up when the urge hits, put it down once I lose interest. Things in life would take me away, then I would get back to it. It was around 2009, I ran across the book again and was talking about it to a friend. She didn’t believe me when I told her I had been writing for several years. So I sent her the first few chapters. She read it and of course she didn’t believe I wrote it. She showed it to a friend or cousin or someone and that person said she didn’t believe I wrote it, that I sent her files from another book etc. It became a joke. She didn’t believe me. Actually, made me feel like I was lying. So I was thinking, I’m going to finish this book, I’m going to try to find out how to get it published and I’m going to thank her in the beginning as a dedication or something.

So, I buckled down and finished the book. I was going back over it doing a sortof edit/rewrite but the draft was done. One day, I decided to add a storm door to the front door since I didn’t have one, just the regular door. I bought the door from lowes, got it home and I opened the box and was pulling the pieces out, leaning them against the wall to start the install. I didn’t realize the glass window of the door wasn’t attached to the frame so when I went to move the frame, the glass fell, hit an open bottle of soda, which then spilled on my laptop. It sparked and died. I lost the complete of what I had written. I didn’t have any backups or anything It was on that laptop and the harddrive was drenched and I couldn’t retrieve the files.

I never went back to try to write that story.

These days, I’m very passionate about writing, MMA (as a spectator), and trying to eat and live healthy.

Usually to relax and unwind, I watch movies or interesting tv series. Also I listen to a lot of podcast (mostly about movies and interesting tv series). I’m also trying to teach myself how to play the piano, so there’s that. I’m no where on that yet but hopefully one day I’ll be able to play something.

Its funny, calling yourself a writer or an author is one of those things that people tend to give you certain looks. People think of that as you have to be a certain type of person. Not all people, and to be honest, this thinking may all be in my head. I kind of felt like saying I was a writer, or an author was fraudulent. It wasn’t until I released the second book in my fantasy series, which was the 13th book I published (I published several books under another pen name as well) that I finally thought. I’m not lying, I am a writer, I’ve written books, I’ve written on several blogs in the past, 2 of which were mine. I’ve even written SOP’s at the place where I once worked that are probably still being used today, 20 years later. That’s what I am and that’s what I consider myself.

I came to that realization last year lol so it wasn’t that long ago. Imposter syndrome is real

I don’t know if I have a favorite… or if I do, it will probably change every few months. I love the Lord of the Rings trilogy. Id say those may be my favorites and the one that always come to mind first. I’m a big fan of Kevin Smith movies. I like comedy but I tend to lean more towards action type of movies, John Wick, marvel movies.

I can completely imagine The Injection being turned into a movie. This book started as a screenplay back in 2012. When I wrote the screenplay and the novel itself, I saw it in my head as a movie and not a book.

DL Jones is a Writer, IT Professional and Tech Enthusiast.
Visit dljonesbooks.com for more info and to sign up for the newsletter
DL Jones was born in Brooklyn NY, grew up in Newport News VA and has spent the last 8 years in Charlotte NC. He has served time in the US Army and works as an IT Professional. His first love has always been tech, well computers and the web specifically, which has led to a lot of writing. He has had several websites/blogs and podcast over the years.
Website * Facebook * Twitter * Instagram * Bookbub * Amazon * Goodreads