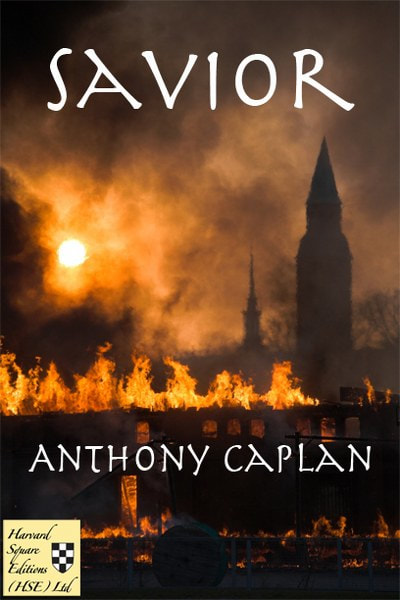 A father and son stumble into the secret world of the Santos Muertos, a
crime cartel bent on global domination. The son must find his father
and keep the secret of the ancient Mayan code underlying the creation
of matter in the universe from falling into the wrong hands.
A story of sacrifice and love.
Editorial Reviews:
“Set in a dystopian near-future, Savior is genre-breaking reading at its
best . . . a fascinating combination of high adventure and
interpersonal relationships that keep Savior an exciting,
unpredictable read right up to its emotionally charged (and
satisfying) conclusion.”
–Diane Donovan, Midwest Book Review
“The story opened strong and it kept that level throughout…This is
definitely a story of love and sacrifice.” —Highway-YA
“The author did a superb job on creating the characters, going deep into
the psycho analysis of their behavior. The plot is very well
constructed….The plot is very intense and it is guaranteed that you
will be hooked from the first page on this incredible adventure,
showing that a love between father and son has no limits. I recommend
this book to the permanent library of all readers that enjoy a very
well written novel and want to be entertained.”
—Roberto Mattos, Books and Movies Reviews
“The use of language is intelligent, and unexpected in today’s
thriller/dystopian genres, with turns of phrase that startle with
their elegance without ripping the reader away from the plot or
descriptions . . . It is exemplary in its stellar use of language,
its complex plot and characterizations, its ability to derive truths
and fallacies and the thin veil separating them.”
—Diane Nelson, Sand in My Shoes Reviews
“I enjoyed the characters very much and the development of the plot line
kept me interested to the end. The Canadian connection made it even
more exciting.” —J.C., Rockwood, Ontario
Goodreads * Amazon 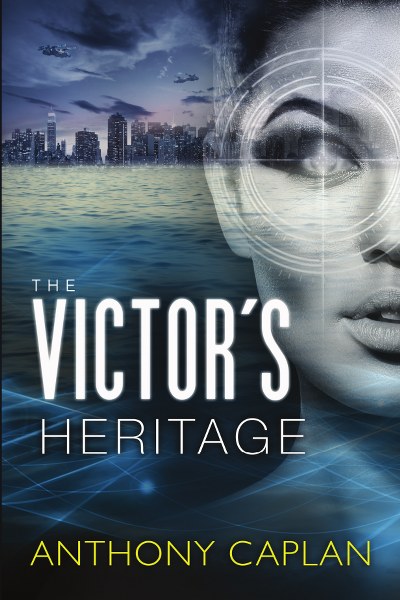 “Is this the future of America?”
“Excellently uncomfortable and engaging.”
“A fast paced read that takes you places.”
An intricately woven, futuristic tale, The Victor’s Heritage parallels
contemporary events. It is 2045. America has been shattered into two
countries. Democravia and the Republican Homeland. Peace between the
two continental rivals is always fragile.

˃˃˃ Rebellious teens seek to forge their own path, but is that always so terrible?

Corrag is one such teen who has been forced into a world that she is
ill-prepared for and yet is ready to embrace new ideas and concepts
far from the standard “party” lines.

˃˃˃ In this latest installment of Caplan’s The Jonah Trilogy, he captures
the force of youth, of coming of age, of new awareness that is put
together into a tale that never lets up! 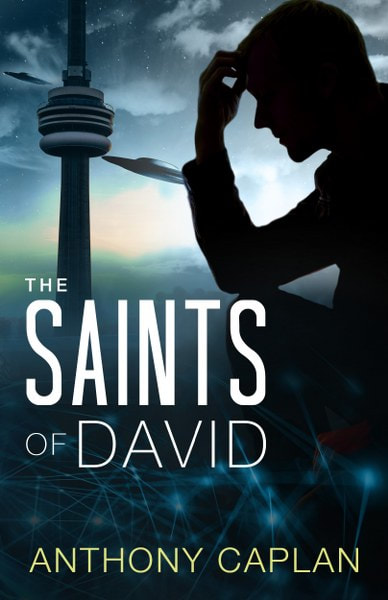 The Saints of David
The Jonah Trilogy Book 3

THE FINAL COUNTDOWN IS NOW!
WILL CORRAG AND BEN REACH DAVID’S TOWER?
WILL THE AUGMENT SURVIVE?
FIND OUT IN THIS FAST-PACED, PSYCHOLOGICAL THRILLER
Corrag and Ben are on the run along with members of their renegade theater
group — the last of the free brained creative folk against the
enslaved people of the Augment and their elite Republican Homeland
overlords.
It is 2072, and falling creative information
flows in the Augment system mean there is little time to reach full
power status and launch the planetary cover before the incoming Oort
Cloud asteroids destroy civilization. Corrag and Ben make a run for
David’s Tower, an alternative society built on the democratic power
of individual stories. Corrag’s father Ricky sets out to find his
father’s book that he is sure will answer the deep-seated root of
humanity’s evil. These are just a few of the individuals on a
quest, drawn to the utopian world of the Tower, built by the man
known to his followers as the Saint. David Shavelson, a former owner
of a Brooklyn bookstore, is a charismatic visionary leading a
community in resistance against the mental enslavement of the Augment
system. The Augment leaders know they must crush the Tower or lose
control of their destiny. The battle lines are drawn. All the answers
will be found in the thrilling roller-coaster finale that is The
Saints of David.
The Saints of David, the final book in the Jonah Trilogy series, is
recommended for new and prior fans alike, who will find this wrap-up
volume a powerful conclusion to Anthony Caplan’s thriller/sci-fi tale.
Old connections are revitalized against the backdrop of
disaster in this 2072 story of strange romances, half-humanoids, free
thinkers and slaves, and the unAugmented people living outside the
new norm who may prove the last bastions of true humanity.
Readers new to this world, as well as those who have imbibed of the previous
Jonah Trilogy titles, will all find The Saints of David packed with a
flavor of doom and hope that makes it hard to put down and an
exquisitely compelling story that leads readers to question many
beliefs before they are through.”
Diane Donovan — San Francisco Relocated
Goodreads * Amazon

Fresh snow on the ground and a sunny day, warm enough to get the runoff from the roof hitting the deck and splashing you when you open the door. Time to get the cross country skis out. We convince the two girls with some effort to come along with us to Carter Hill Orchards. Michael is tired from a night of snowboarding with his pals and a day at work yesterday at the Tilton Farmer’s Market, so he stays home. And he misses all the fun. We are driving the back road where Pine Hill Road loops one way to French’s Farm and the other way down into Contoocook. We come around the bend and slow at the sight of a truck stopped in the middle of the road, two men standing at both ends of the truck, and a large pink pig with big ears wandering the road and circling. We pull around the loop and Susan says, stop and help them. Be a good neighbor.

So I get out and the two guys are from Hillsboro, dressed in old jeans and flannel shirts and road crew jackets and knit caps. One is about six five and the other is about my height. The tall guy is the owner of the pig. I can’t believe this is happening to me, he is saying. By gosh something like this has never happened to me. That pig just jumped clear out of the back of the trailah. I never would have believed it.

I don’t know whetheh I’d believe it if you’d a told me, says his friend.

They are waiting for a friend, Gamiel who is bringing a rope with him. The pig is very tame, is hanging around the truck. A lady runs by, a jogger, she shoos the pig as she runs by. Then Gamiel comes up behind us in another truck. He is French or Italian or possibly Arab, with a coil of greasy, knotted rope he is trying to untangle as he walks over. The men are overjoyed. Charlie, here take the rope says Gamiel, unknotting several feet of it and throwing it at the tall man. The two friends begin to stalk the pig. We’ll tie ‘is legs if we haffta, Charlie. Know what I mean? says the short man. Charlie aproaches the pig slowly and lifts a coil of rope and tosses it hesitantly. The pig catches it on her snout and decides it is not right for her and snuffs it off. Just throw it Charlie, says Gamiel. She wants to be caught. You haffta not be so nice.

I don’t know if I like this, says Charlie. I’m not liking this one little bit. Then he tries again and this time he’s got her head in the loop. The pig gives a mighty grunt and then she is tackled by Charlie into the snowbank. She is screaming bloody murder. At this point I go around the truck. The pig is back up and the two men are trying to restrain her with the rope by choking her. You’ll kill her that way, I say. I grab the pig by the two front legs and lift. Charlie gets the idea and lifts the two back legs and she flips onto her back and we carry her around the truck down to the back of the trailer. Charlie loses his grip and I pat the pig’s neck and loosen the rope from around her bruised skin. We’ll get you home, buddy, I say. She relaxes on her side in the snow as we wait for Gamiel and Charlie’s friend to lower the trailer’s gate. Then we lift her onto the gate and she slides in, grunting with delight to be back with the other pig, which is her sister. Let’s go I say to Susan. Good luck guys.
You left the door open, say the girls. It was cold.

We’re driving through Hopkinton to get to the orchard. I’m stinking the car up wth the smell of the pig on my sweat pants. When we get to the orchard I get out of the car, what a beautiful sight of the mountains. And the snow is perfect, not too wet. The skis glide in the tracks and the girls are not too bad for the first time out on the skis they got for Christmas. 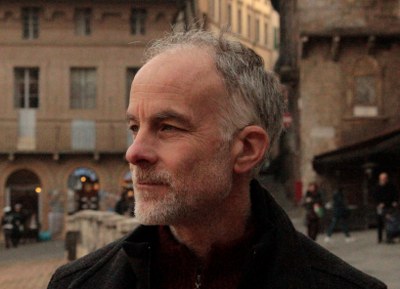 A former journalist who has worked on three continents, Anthony Caplan lives in New
Hampshire with his family, a small flock of sheep and several dozen
carefully tended apple trees. He writes books and teaches high school
Spanish. He is a graduate of Yale University and has also worked at
various times as a taxi driver, shrimp fisherman and telephone salesman.
Website * Facebook * Twitter * Instagram * Amazon * Goodreads