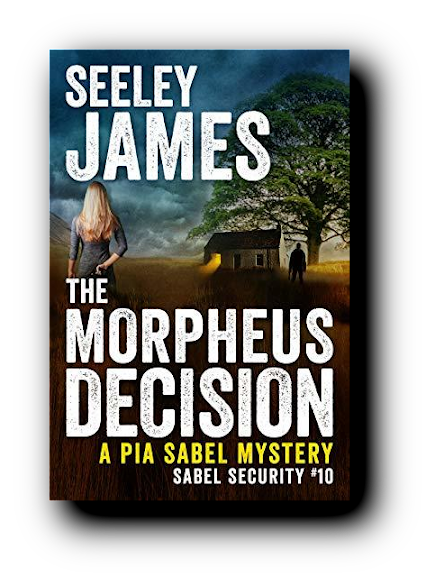 When a friend from her days in international soccer, now a British constable, is murdered, Pia Sabel uncovers an assassination ring catering to the ultra-rich – putting her dead center in their crosshairs.

For most of her life, Pia Sabel worked through the pain of losing her parents, threw herself into her work, and lived with insomnia. Now her doctor warns growing paranoia will soon threaten her mental health. She escapes to rural England to mourn the loss of her friend. On arrival, she is attacked by a mob, dismissed by officials, and ridiculed by high society for inquiring about an English Lord and a British institute. The more people tell her not to ask questions, the more she questions their motives.

Unconquered and unafraid, she investigates the murder and exposes a well-connected web of billionaire suspects. Along the way, she touches a nerve, bringing down an avalanche of killers on top of her. Unable to trust anyone, from the handsome Scot she wants to know better to Britain’s titled class, she must unravel the clues before more victims land in the morgue. Peeling back the layers of deceit, lies and cover-ups, Pia finally discovers the truth about who killed Chloe England. A revelation sure to endanger everyone she loves.

Blood drifted over the curb on its
way to the gutter as Chloe England tried to shift her gaze for a better look.
Her eyes wouldn’t respond. Not even a blink. Her vision was fixed on the
chemist’s across the narrow lane. Closed. And for a long time judging by the
dirty windows.

Her arms and legs wouldn’t move
either. The blood felt warm on her cheek. Chloe had the strangest feeling it
was her blood. After all, she was lying on her side with her face pressed to
the cement, but she wasn’t sure why. When she tried to think, all that came to
mind was TS Eliot from a boring literature class long ago:

I have seen the moment of my
greatness flicker,

And I have seen the eternal Footman
hold my coat, and snicker;

And in short, I was afraid.

She’d rather have been on the pitch
playing football than stuck in a classroom reading that drivel.

Chloe sensed a presence lean down
over her. Maybe it was a good Samaritan who could help her up. Her muscles
weren’t responding. Someone reached over her shoulder and plucked the phone out
of her hand. The person disconnected her call.

So, not a good Samaritan.

Chloe felt embarrassed. The stalker
just cutoff the voicemail to Pia Sabel before she’d finished. What would Sabel
think of the poorly worded message? Rambled on like a fool, she did. To top it
off, she’d blanked before telling Sabel what she wanted. Such bad form. A
throbbing pain came from the back of her head. Along with the throb came a dim
memory of the previous few seconds. She’d been chattering on about the woman in
the hospital and her ridiculous story about people who could kill your enemies
through their dreams. For a fee. Had she told Sabel that part? It’s what she’d
intended to say. Now that she thought about it, she’d prattled on about their
rivalry on the soccer pitch. Was that all the further she’d got?

Hardly a rivalry, though. Chloe did
her best to defend for England in every game—but who could stop Sabel? Chloe
remembered their first encounter. The young phenom was sixteen and out to prove
herself in a friendly. Chloe had twenty-five caps by then. She’d considered the
teenager a trifle. Young Sabel came straight at her, no fear. Charging in like
a freight train. But she was ready. She herded the kid to the sidelines, making
the only option to go out of bounds. Sabel played into it, dribbling into a
rapidly narrowing lane with nowhere to go. Rookie mistake. Then Sabel popped
the ball between them, waist high, smacked it with her knee, sending it over
Chloe’s head. Using her height advantage, Sabel jumped in the air like a rocket
and headed a perfect cross to the American forward flying up the middle. It
happened so fast Chloe could only laugh. What the hell was that? Thank god the
game didn’t count for anything.

Sabel was a thorn in her side for
the next four years. The Mexicans called her La Tigresa—the tigress—for good
reason. And the international press adopted the nickname. But in the privacy of
England’s locker room, especially among the defenders, she was known as that
cunt. When Chloe retired, she rejoiced that her endless nightmares of Sabel
hurtling toward her would finally end.

Now they were both out of the
beautiful game. Chloe had bounced around until she found her calling: police
constable. Who would’ve thought? All those years leaving your blood, sweat, and
tears on the pitch for your country and what career options await you?
Sportscaster? A crowded field. Coach? Underpaid profession. Talent scout? Too
many rows with desperate parents—whose children didn’t know the difference
between a football and a cheese loaf—kept Chloe out of that one. Then Dad
suggested she follow him into the Greater Manchester Police, the illustrious
GMP. It wasn’t the bright lights and big stage she’d hoped for. It had even
caused her some embarrassment when dialing Sabel. How you doing, old frenemy?
Running a huge company these days, I hear. Chilling with presidents and prime
ministers, are we? Me? Oh, you know, constable. Still. Working on becoming a DI
like Dad, though. So, what’s new?

Yeah. That was a tough call.

She hoped she hadn’t botched it. It
was important. Sabel’s name was on the nutter’s list. Even if La Tigresa had
been hell to defend, she did deserve to know someone had her on a list. It
might be nothing, but some of the names on the list were dead. And Chloe hoped
Sabel would help her figure it out. Reconnect for some laughs. Maybe.

A warm hand touched Chloe’s neck.
Not in a kind way. The person who’d taken her phone feeling for a pulse? She
tried to check her heartbeat, too. She wasn’t feeling it. Or was she? Not
strong, anyway. Was she dying?

Once, she’d run to the scene of a
man hit by a car. It was obvious to everyone around him that he was a dead man with
a few seconds of life left, yet he had no idea. He kept apologizing for being a
bother.

That’s when Chloe remembered the
loud crack. The sound of metal connecting with bone. Big bone. Hollow. Like her
skull. Is that where the blood was coming from?

She felt it now. Sliding down the
back of her head, into her hair, onto the sidewalk. Someone had smacked her a
good one with a baton. They could fix that in casualty, right?

The hand withdrew. Chloe heard
someone walk away. The street was empty. Thick dark clouds obscured the
remnants of twilight. The heavy sky closed in on her. It would rain soon.

It was her own fault, Chloe
realized. She’d been so preoccupied with the call to Sabel—trying not to sound
like one of those barking-mad fans—that she hadn’t noticed where she was going.
It was a mistake. She’d taken the shortcut. A short, dark lane lined with
defunct businesses. Now she wouldn’t have a chance to save Pia Sabel’s life.
She wouldn’t be the heroic constable who solved the dreamland-assassins mystery.

Worst of all, there would be no
security video of who killed Chloe England. 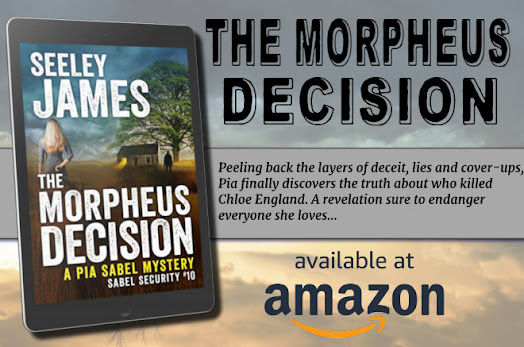 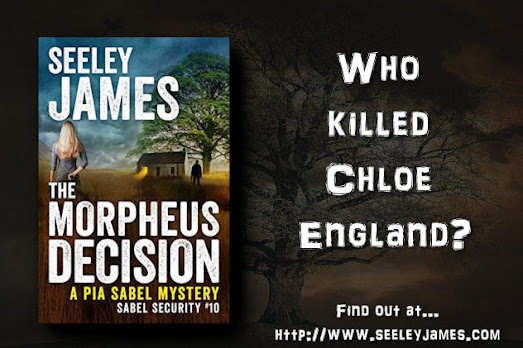 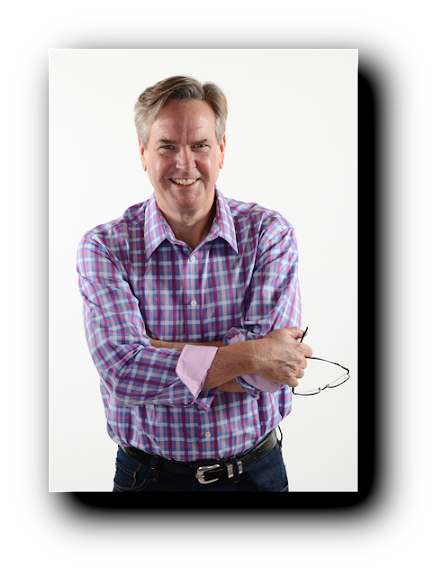 Seeley James’ near-death experiences range from talking a jealous husband into putting the gun down to spinning out on an icy freeway in heavy traffic without touching anything. His resume ranges from washing dishes to global technology management. His personal life ranges from homeless at 17, adopting a 3-year-old at 19, getting married at 37, fathering his last child at 43, hiking the Grand Canyon Rim-to-Rim at 59, and taking the occasional nap.

His writing career ranges from humble beginnings with short stories in The Battered Suitcase, to being awarded a Medallion from the Book Readers Appreciation Group. Seeley is best known for his Sabel Security series of thrillers featuring athlete and heiress Pia Sabel and her bodyguard, veteran Jacob Stearne. One of them kicks ass and the other talks to the wrong god.

His love of creativity began at an early age, growing up at Frank Lloyd Wright’s School of Architecture in Arizona and Wisconsin. He carried his imagination first into a successful career in sales and marketing, and then to his real love: fiction.

Death and the Damned 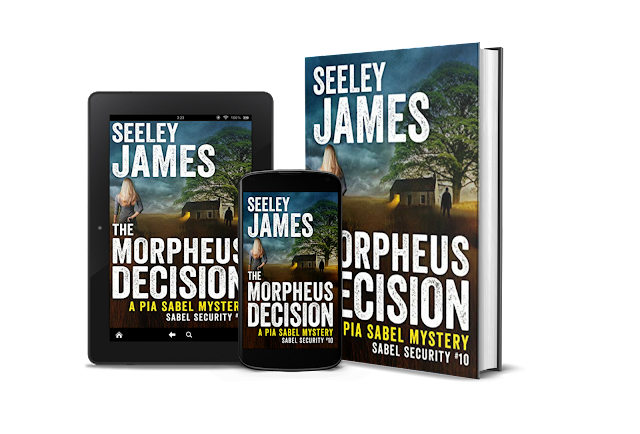