The following content was originally presented by Shannon Muir on a separate blogging site and has been moved here to consolidate all blog tours in one place for historical purposes. She would love for readers to continue to discover past content, even if this is not the blog it was originally featured on.
We’re thrilled to kick off the virtual book tour for THE PENITENT by fantasy author A. Keith Carreiro. If you would like to follow his tour, visit Pump Up Your Book!

THE PENITENT
By A.Keith Carreiro
Fantasy

THE PENITENT—PART III, the third installment in author A.
Keith Carreiro’s Immortality Wars series, brings Pall Warren, an elite
warrior touched by the hand of God, into a new battle that pits the
forces of good against those derived from the evils of man and beyond.
As the final book in The Penitent trilogy, Pall joins with
former enemies and comes closer to fulfilling his purpose of overcoming
the corruption threatening humanity.

In THE PENITENT—PART III, Pall Warren recovers from another
bout of the suffering that has plagued his life by helping his friends
bury their family members who were killed by a supernatural being with
an insatiable appetite for humans. He travels to Gullswater, West
Fündländ, in search of John Savage—the accomplished bowman—who was once
his foe. The men forged their friendship in combat against Commander
Gregor Mordant and his Marauders.

While Pall searches for his friend, Savage meets with his employer,
Braucus Peredurus, the King’s minister of affairs, to report his
observations of mystical events and otherworldly creatures and then
reveals that he has been tracking Commander Mordant, who, as he learns
from Peredurus, is a key member of the King’s intelligence service
network.

Mordant is loyal to Kosem Mungadai, the respected head of the Church
of Equity in the City of Seascale and a practitioner of the occult arts.
Savage suspects Mordant is working against the King’s agenda and wants
to detain the Commander, but Peredurus orders him not to; however, this
command does not stop the bowman from surveilling Mordant. Meanwhile,
Pall encounters Merek, a former member of the Marauders and crossbow
expert. Merek suggests that Savage has gone to Seascale in search of
Mordant.

As tensions rise in the city, Mordant, Mungadai, and Savage cull
together fighters to engage in urban warfare during a torrential
rainstorm. As the battle begins, Pall and Merek stealthily contribute to
Savage’s efforts. While the warriors relentlessly brawl throughout the
pitch-black night, Mungadai conjures a squad of supernatural beings to
assault Savage and his warriors with the ultimate goal of overthrowing
the kingdom and empowering the evil forces he serves.

In writing THE PENITENT—PART III, Carreiro’s goal was to
create an epic story that brings Pall closer to fulfilling his destiny
by posing the question, “In his quest for meaning, can virtue be used to
combat and overcome evil?” For the reader, Carreiro hopes THE PENITENT—PART III
offers a sense of “the mystery, wonder, and grandeur that is in this
world and beyond that is available to us in the time we are placed here,
despite the suffering and challenges each of us faces in our own
lives.” 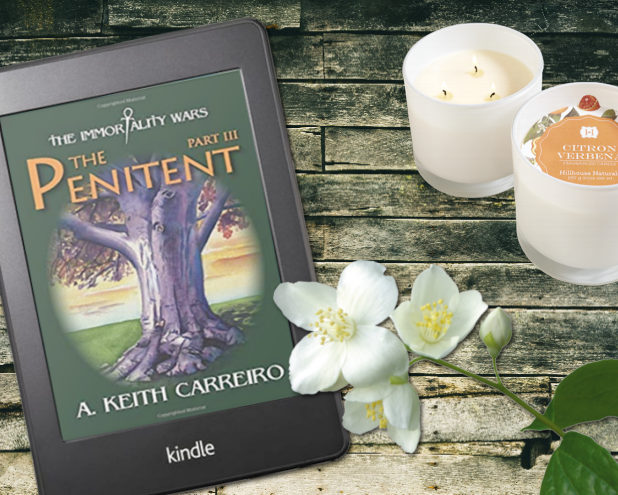 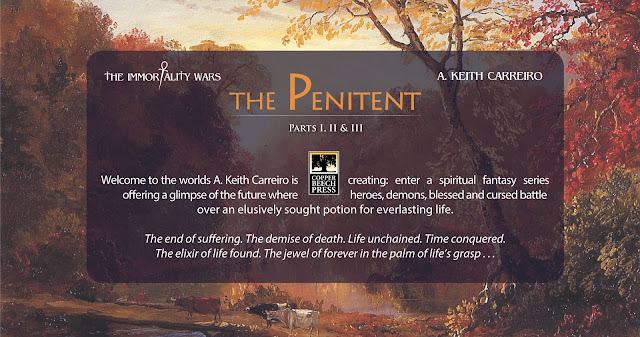 Seascale was a beautiful place to be. The Commander reveled in being there. Built on top of a natural limestone promontory, its one hundred five–foot sloping walls were made up of the finest quality limestone. The top of the parapets was up to twenty–five feet wide, the base being half more in its width and extending another twelve levels below ground. Mordant often would spend time walking these walls, talking with the guards posted on them and looking out at the Great Bay beyond them.He knew that the stone he walked upon was quarried from the other side of the crescent shaped bay. Ages ago, it had been brought by barge to the location where he now stood and built with great skill by the architects and masons of that ancient time. When the sun threw its light on the walls themselves, he thought it seemed to caress them as a lover touches his paramour. As a result of the sun’s fervor on the stone’s clear surface, the walls responded in a light golden yellow blush. 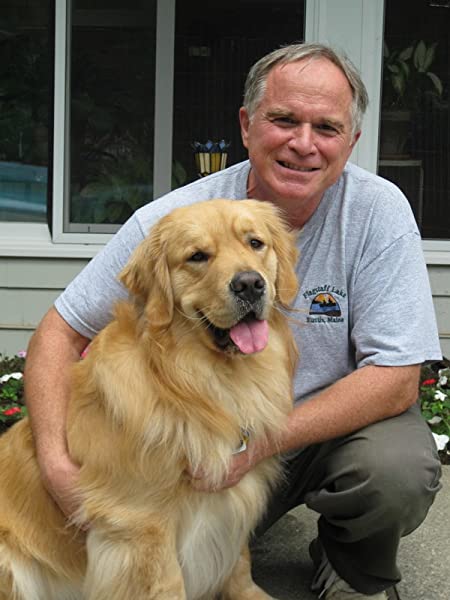 Keith Carreiro is the author of a planned nine-book series called The Immortality Wars. The Penitent—Part III is the third book and the last installment in the series’ first trilogy.
Carreiro is an adjunct professor at
Bridgewater State University and Bristol Community College. He earned
his master’s and doctoral degrees at Harvard Graduate School of
Education.
Acting on his lifelong love of storytelling, Carreiro began writing The Immortality Wars series in 2014.