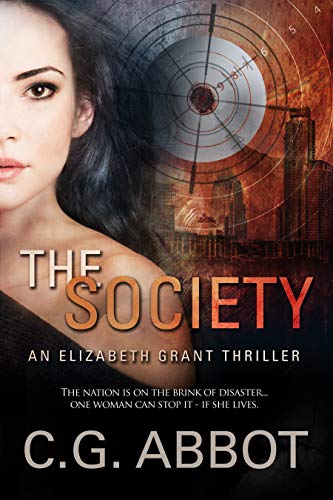 When Elizabeth Grant sees her childhood friend, she is thrown into a world of secret societies laced with conspiracies.Elizabeth has been plagued with visions since the disappearance of
Loralie. When she returns to the small town of her childhood, she’s
unaware that she’s walking into the middle of what killed her friend.

Unknown to the rest of the world, The Society for a Restored America
has been preparing to seize control of the government through
manipulation of a national crisis. The Society’s membership has already
infiltrated the government and military at the highest levels. The only
thing between them and success is Elizabeth Grant.

Elizabeth must accept her special gift and stay alive long enough to
uncover the Society’s dark plot to seize control from a nation that
blindly supports them.

She hit the floor, hard. Thud.  She just missed hitting her head on the
nightstand.  Her eyes darted around the
room aglow with moonlight, out of breath from the nightmare.  Where was she?
It wasn’t until her senses took in the
ratty stuffed bear that sat on the white dresser, the white lace curtains that
rustled from a whispered breeze heavy with scent of Magnolias, and the chorus
of many crickets that she remembered.
She was in Mississippi, hundreds of miles away from her Denver
apartment.  Her grandparent’s house,
well… grandma’s ever since gramps had passed a few years ago.
Unease settled into the pit of her
stomach, beyond what the vivid dream had produced.  Loneliness assailed her and settled in her
heart. Her first night back in Cyprus and her nightmares returned.  Thought I was over all that.
Elizabeth took several deep breaths to
steady her nerves and slow her breathing.
Her muscles ached as she stood, legs like rubber and hands shaking.  The recurring dream always produced such a
physical reaction.
She knew from experience she wouldn’t…
couldn’t, fall back asleep after her fight-or-flight response had kicked into
overdrive.  She made her way downstairs
with care at each step.
Elizabeth grabbed the teakettle before its
shrill whistle could disturb the tranquility; she was accustomed to living with
a roommate and being quiet.  Hopefully,
some tea would help to calm her nerves… and her nausea.  Another physical result of the nightmares.  She poured the water over her waiting tea bag
in a mug.
She rubbed her sore thigh and then rotated
her aching shoulder from falling out of bed as the tea steeped.  Her long chestnut hair was still disheveled
and her pallor made the sprinkling of freckles across her face and cheeks stand
out.  Her heart was approaching a normal
rate.
She settled into a worn chair in Grandma’s
living room, last decorated a few decades ago when brown and gold country
fabric patterns with heavy oak touches were all the rage.  The scent of lemon furniture polish clung in
the air.  She breathed deeply the steam
from the tea and let her breath out slowly.
The subdued light from the one lamp created a cocoon of safety and
comfort.  Now that the adrenaline rush
was fading maybe she could get another hour or two of sleep after all.
The nightmares would pass, she had to face
them head-on like you would a bully.
She took in the room, each knick-knack and
crocheted doily.  She used to spend every
summer with her grandma and grandpa. It had been like a second home.  Her first summer spent here she was lonely,
until she met Loralie, a local girl, in the park.  She was only six and Loralie barely five
then, and they had been like sisters from that moment.  They were both raised by single moms and
didn’t know their dads.  Elizabeth’s life
had changed in that instant in the park.

Until seven years ago when it all changed
again, all because she didn’t come to visit over the summer.  Her world shifted because of that simple
decision.  Loralie, the closest thing to
a sister she ever had, disappeared the summer she didn’t come to visit, and
worse – they had fought terribly only weeks before she vanished.
Digging up old bones.
Her life was moving along fine on a
predictable path of school, and eventually college.  When they had fought over Loralie’s brother,
Jeremiah, she couldn’t have known that would be the last time they would speak,
the last memory of her would be words of anger.

She took a sip of tea.  Why had she started having the nightmares
again?  It had been over a year since the
last one.  But, this was her first visit
to Mississippi since the night Loralie had gone missing.
Maybe just returning was enough to start
her night terrors again. Shouldn’t it be ancient history and the nightmares
long gone?  Okay, she still felt guilty
for not visiting that summer, as if she could have prevented whatever happened
to Loralie.
She held out hope that her dearest friend
had left town touring with a band or something and got out of Cyprus.  One day her friend would call and share her
adventures, and she’d be happy.
Nightmares were one thing and even
understandable, but seeing things – visions or hallucinations – was a whole
different matter.
The night Loralie went missing was the
night she swore she saw a vision of Loralie in her bedroom in Denver,
Colorado.  An image of a beaten and
bloody Loralie, who was physically in Cyprus hundreds of miles away, appeared
right there in her bedroom, frantically reaching out to her.  Then Elizabeth passed out.  When she regained consciousness her mother
was holding her in her arms and dabbing her face with a cold washcloth.
It was on Elizabeth’s insistent pleading
that her mother called Mississippi in the middle of the night to ask a groggy
Mrs. Carter to put Loralie on the phone.
She remembered taking the phone, waiting for Loralie to talk to her so
she could get that image out of her mind, only for Mrs. Carter to come back
with ragged breaths and exclaim; “She’s not here.  I can’t find her!”
It was the instant that she had that
vision of Loralie which really changed her life.  But she had seen her and was
inconsolable for hours, so she was labeled “fragile”, “over-sensitive”, and
“over-wrought”.  Being at grandma’s was
bringing it all back.
Digging up bones.
No physical trace was ever found of
Loralie.  Then the nightmares had started
– and hallucinations of Loralie regularly over the last seven years.  The nightmares terrified her, but the
hallucinations… visions… whatever you called them – they left her doubting
herself.
She made the mistake of researching what
could cause hallucinations and was convinced she had a brain tumor or something
for the first year.  Still, she told
nobody about her continued visions.  As
far as everybody else knew, her mother included, the night Loralie disappeared
was the only time she experienced such a visual aberration, rather than the
continual problem that plagued her still.
She shook her head to dismiss such serious
thoughts.  It was disconcerting to be
here again.  She wasn’t the same person
who had last run happily through the house.
She rubbed her eyes and sipped at her tea,
clearing her mind.  She stiffened when
she heard a car pull into the driveway.
Every cell in her body listening.
This wasn’t Denver, people in rural little
Cyprus were asleep at this hour.  Maybe
some were doing chores on the surrounding farms, but nobody was out visiting in
the wee hours of the morning.
Barely audible footfalls on the veranda
floorboards and a soft knocking at the door made her heart race.  Just that quickly the feeling of a secure
cocoon vanished – replaced by dread.  She
scanned the shadows and saw Loralie, forever sixteen, like an animated
photograph, motioning with a degree of urgency for her to go answer the
door.  She swallowed, shakily set her tea
down, and stood up.
Surely it’s nothing.  It’ll be innocent, you’ll see.
But, she felt like she was on the very edge of a cliff and everything in
her life was about to change… again.
She took a deep breath to calm herself and
rolled her shoulders back, crossed the living room to the door and slowly opened
it.
On the wide white-painted veranda was an
elderly black woman with her hand poised to knock again.  She lowered her hand and smiled.  It was wide genuine smile that made her eyes sparkle.  In the illumination of the porch light, her
coifed white hair looked more like a halo.
She wore a turquoise cotton dress, was of average height, but stood
proudly and with composure.  Another time
and place one might think she was Egyptian royalty.
“Hello dear, I’m Madame Antoinette of
Shreveport, Louisiana.  You must be
Elizabeth.  I’ve been driving all night
to talk to you, hon.” Her voice was melodic with a reserved southern
drawl.  She watched expectantly as
Elizabeth blinked a few times.
“Ma’am, you’re here to see me?  At 4:30 in the morning?  Are you sure you have the right house?”  Elizabeth whispered because she instinctively
felt the need to be quiet.  A dog barked
in the distance, then howled – a long mournful baying filled the air.
Madame looked around at the other houses
on the street.  All were dark and
quiet.  Returning her attention to
Elizabeth she whispered, “I must speak with you about Loralie.”  Looking around again she added, “I had to
visit when it was least likely to be seen.”
~ ~ ~ ~ ~ ~ ~ 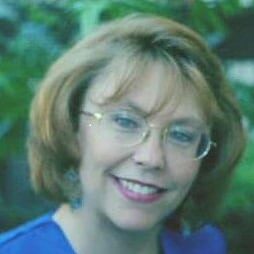 CG Abbot was born and raised in Colorado, graduated from college with
a degree in business administration as well as a degree in Sacred
Theology. While working in large companies and even Department of
Defense, she dreamt of writing.  She still resides in Colorado and
enjoys creative outlets like scrapbooking, card making, photography, and
painting in watercolor and acrylic. She inherited a love for reading
from her family and grew up talking about books at the dinner table.
Website Address:  www.cgabbot.yolasite.com