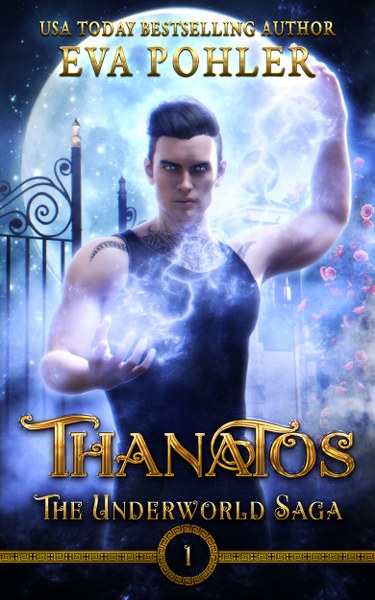 Dive into a world in which the ancient gods of Greece are real.
Fifteen-year-old Therese watches her parents die. While in a coma, she meets the twin sons of Hades—Hypnos (the god of sleep) and Thanatos (the god of death). She thinks she’s manipulating a dream, not kissing the god of death and totally rocking his world.
Than makes a deal with Hades and goes as a mortal to the Upperworld to try and win Therese’s heart, but not all the gods are happy. Some give her gifts. Others try to kill her.
The deal requires Therese to avenge the death of her parents. With the help of Than’s fierce and exotic sisters, the Furies, she finds herself in an arena face to face with the murderer, and only one will survive.
**Get it FREE**
Add to Goodreads
Amazon * Apple * B&N * Google * Kobo * Website
Series Trailer
https://youtu.be/inAAKTx1cOk 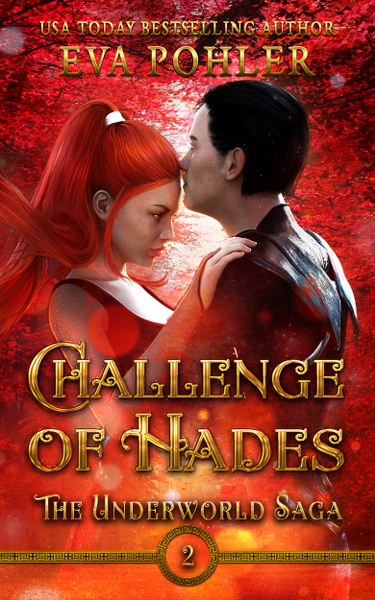 Thanatos and Therese’s love story continues in the second book of this epic young adult series by USA Today bestselling author Eva Pohler.
Ten agonizing months have gone by since Therese faced off against her parents’ murderer at Mount Olympus, and she suspects Thanatos’s absence is meant to send her a message: go on with your life. She tries to return Pete’s affections even though her heart aches for the god of death. Then she becomes infuriated with Than when he says that he’s “been busy.”
In cahoots with her new friend, who’s gotten in with the Demon Druggies at school, Therese takes a drug that simulates a near-death experience, planning to tell Than off so she can have closure and move on, but things go very, very wrong.
Eventually she learns that Than has been busy searching for a way to make her a god, and he’s found it, but it requires her to complete a set of impossible challenges designed by Hades, who hopes to see her fail.
Add to Goodreads
Amazon * Apple * B&N * Google * Kobo * Website 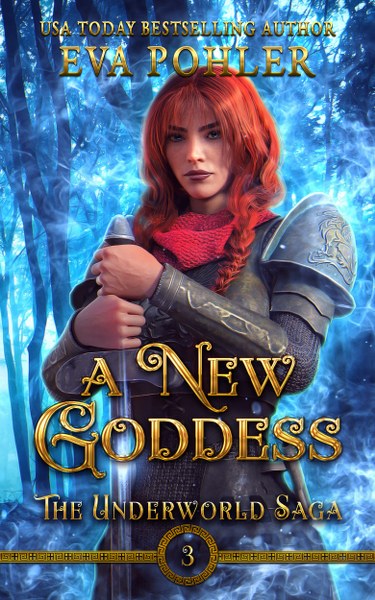 Death is not the worst fate for a goddess.
The Olympians don’t tolerate oath-breakers.
Therese may have finally succeeded in becoming a goddess, but if she wants to remain one, she’ll have to discover her unique purpose and make some allies among the gods. Artemis sends her on a seemingly impossible quest across the world, while Than searches for a way to appease Ares. To make matters worse, Therese’s unborn baby sister’s life depends on the outcome of her quest.
Can Than and Therese finally live the life they’ve dreamed of? Or do the gods have other plans for them?
Add to Goodreads
Amazon * Apple * B&N * Google * Kobo * Website 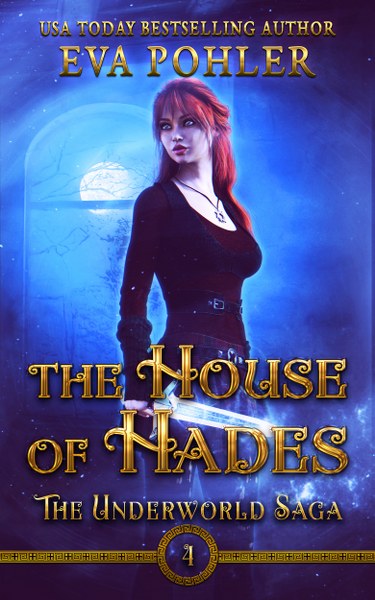 The House of Hades

Just when things were looking up for Than and Therese, everything crumbles.
Eighteen-year-old Therese Mills has second thoughts about marrying Thanatos when she learns that no god has ever been faithful to his wife. But before she can move out of Than’s rooms and into Hecate’s, the Underworld is attacked, she and her friends are crushed, the souls are unleashed, and a malevolent goddess threatens to unhinge Mount Olympus.
Hypnos has just made a deal with Hades to have his turn in the Upperworld, but before he can tempt Jen with a kiss, he’s called back to rebind the souls and defend the House of Hades, and he unwittingly puts Jen and her family in harm’s way.
Can Hip, Than, and Therese save the living and the dead?
Add to Goodreads
Amazon * Apple * B&N * Google * Kobo * Website 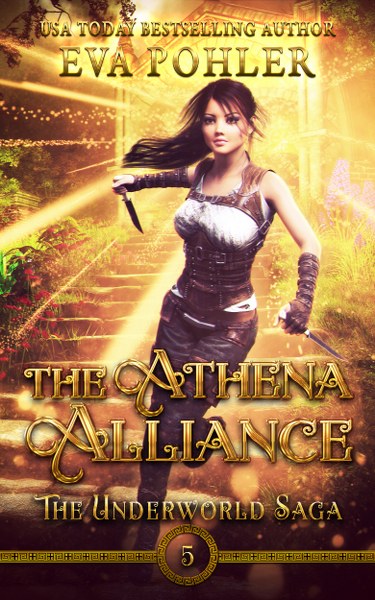 She never thought her wedding day would be like this.
When Zeus invites Therese and Thanatos to a party on Mount Olympus in their honor, they and the other gods who have formed the Athena Alliance are immediately suspicious of a trap. They fear Zeus has learned of their desire to free Metis and Cybele and to stand up for all the women he has wronged.
Although Therese recruits Dione, Amphitrite, and others to the Alliance, Pete has unwittingly sabotaged their plans by revealing to Zeus the prophecy from the ghost of Mr. Holt. And now, the day that might have been the most wonderful day of Therese’s life (her wedding day) will be wrought with conflict where someone close to her is fated to die.
Can Therese and the other gods in the Alliance bind the almighty Zeus and restore justice and true democracy among the Olympians? Or will Zeus succeed in swallowing Therese and separating her from Thanatos for all eternity?
Add to Goodreads
Amazon * Apple * B&N * Google * Kobo * Website 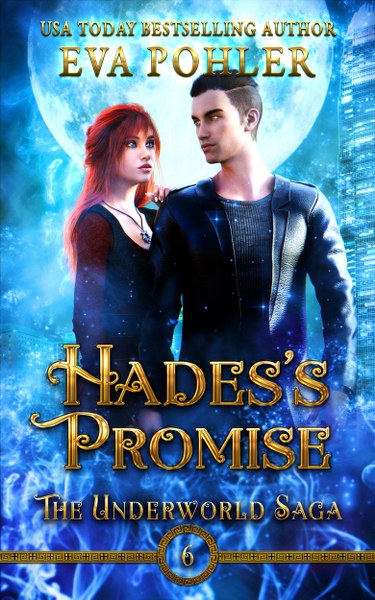 Therese never expected to find herself in Circe’s battlefield again, and this time she fights for things more important than her life.
Before Therese and Thanatos can come to terms with the uncertain future of their unborn twins, Poseidon is attacked and both his wife and trident are stolen.
Therese is forced to deliver her babies in the midst of an all-out war with enemies more powerful than the Olympians.
Add to Goodreads
Amazon * Apple * B&N * Google * Kobo * Website 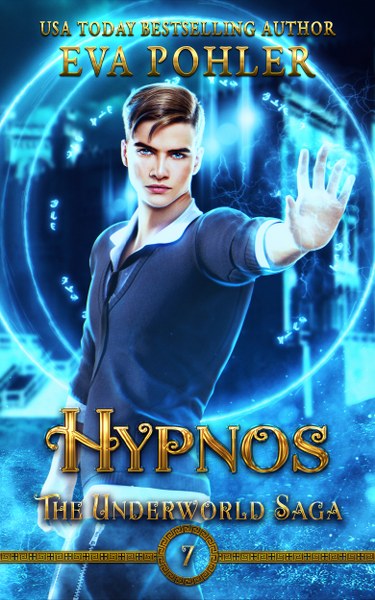 Therese doesn’t like being stuck on the sidelines, especially when the entire pantheon is in trouble.
Hypnos and Jen aren’t married long when they realize something’s missing: they both want to have a child, especially when they see how happy Therese and Than are with their twins. But the creation of new gods is against the rules, and they aren’t willing to give up their immortality.
Hypnos goes to Mount Olympus to offer Zeus a deal. He’ll make it his mission to find out the source of the recent attacks on Gaia–horrible earthquakes that have already released two monsters from the Titan Pit–if Zeus will agree to let him and Jen have one immortal child.
Because the attacks are getting humans killed and none of the other gods have been able to discover a lead, Zeus, in his desperation, agrees. But this new quest just might get Hypnos swallowed and trapped for all eternity, and there seems to be nothing Therese and Than can do to stop it.
Add to Goodreads
Amazon * Apple * B&N * Google * Kobo * Website 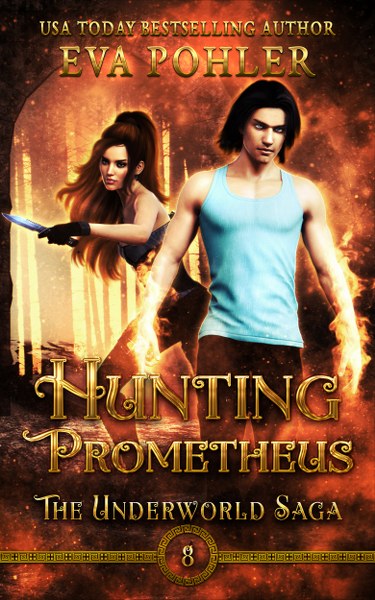 Hermie and Hestie never asked to be demigods.
Unlike others of their kind, they aren’t interested in going on quests and being the center of a world-changing prophecy. But when Zeus learns of Apollo’s vision–of the twins finding Prometheus, Zeus’s number one enemy–the hunt for Prometheus begins.
Zeus and his allies want to bind Prometheus and to kill the twins before their threat of a revolution becomes a possibility. If Hermie and Hestie don’t find the Titan first, they have no chance of fulfilling their destiny or of surviving Zeus’s threat against them.
Add to Goodreads
Amazon * Apple * B&N * Google * Kobo * Website 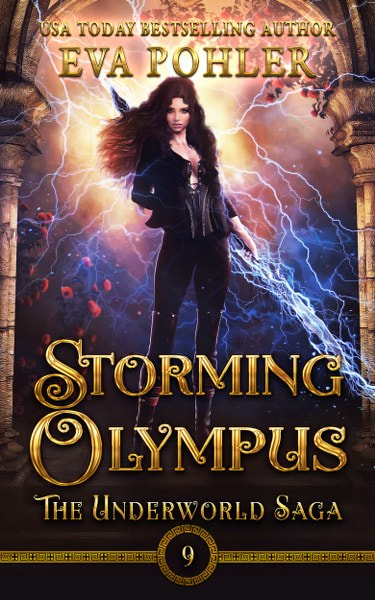 The rebellion led by Hades prepares to storm Mount Olympus.
But their every move is sabotaged. Morpheus is torn between his allegiance to his Underworld family and the oath he swore to Zeus under duress. Forced to play both sides, Morpheus sees no hope for the rebellion.
Hermie and Hestie share Morpheus’s despair. Although Poros turned them into gods, the transformation has only heightened Hermie’s debilitating fears. And even Hestie’s fierce determination isn’t enough to overcome her trust issues.
As the gods square off, how can one identify the friend from the foe?
Read the surprising conclusion to USA Today bestselling author Eva Pohler’s The Underworld Saga.
Add to Goodreads
Amazon * Apple * B&N * Google * Kobo * Website 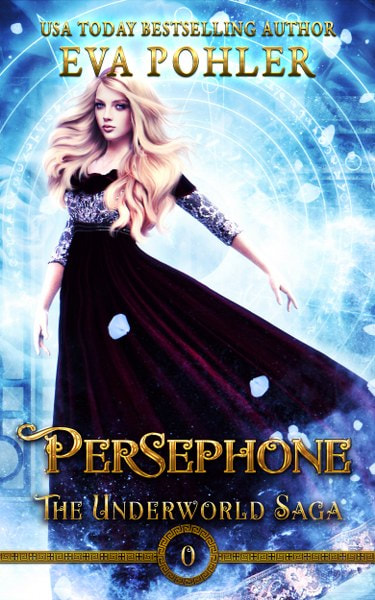 Unrest brews among gods and mortals alike when Hades makes a deal with the Fates to end his loneliness in the Underworld.
But when Persephone proposes to conspire with him in a plot against Demeter, things get out of hand.
Find out the truth of how Hades and Persephone met and fell in love and the impact it had on the rest of the pantheon in the throes of the Trojan War. Learn how their children–Hypnos, Thanatos, Megaera, Tisiphone, Alecto, and Melinoe–came into being. Discover why they were assigned their respective duties as Sleep, Death, the Furies, and the goddess of ghosts. Find out the real reason why the Olympians possessed such profound disdain for these Underworld gods.
This prequel to The Underworld Saga is more than a retelling of the Persephone myth. Many more of the ancient myths are woven together to reveal the conflict, tension, and relationships among the gods in one of the most beloved pantheons in human history.
Persephone can be read before or after The Underworld Saga, but might be enjoyed best at the end.
Add to Goodreads
Amazon * Apple * B&N * Google * Kobo * Website 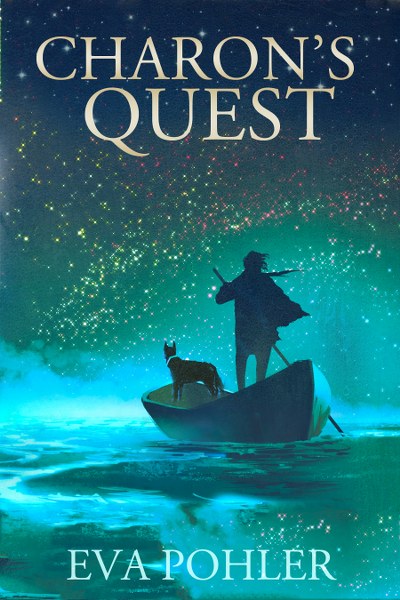 The ferryman of the dead is forced to leave the life he’s always known.
Apollo has had a vision: as the life of each soul flashes before Charon’s eyes, the ferryman ages like an old man. Charon needs to experience his own adventures to become youthful again, or he will soon die. The last thing Charon expects is to fall in love with a mortal woman—someone he can’t take with him when he returns. Charon must decide whether to abandon the love of his life or his duties.While Charon’s Quest shares the world of The Underworld Saga (a bestselling paranormal romance/urban fantasy series), it can be read before or after or anytime in between the rest of the books in the saga.
Add to Goodreads
Amazon * Apple * B&N * Google * Kobo * Website 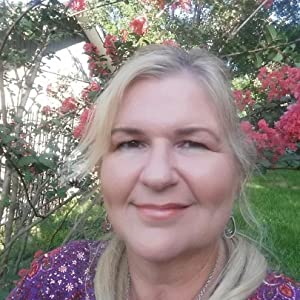 Eva Pohler is a USA Today bestselling author of over twenty-five novels in multiple genres, including mysteries, thrillers, and young adult fantasy. Her books have been described as “addicting” and “sure to thrill”–Kirkus Reviews.
After teaching writing and literature at a university for over twenty years, Eva is now a full time writer in San Antonio, where she lives with her husband, three adult children, and three dogs.
A reader herself, Eva’s stories blur the line between reality and fantasy, truth and delusion, and draw from Eva’s personal philosophy that a reader must be lured and abducted into complete captivity in order to enjoy the reading experience.
Website * Facebook * Twitter * Instagram * Pinterest * Bookbub * Amazon * Goodreads * YouTube