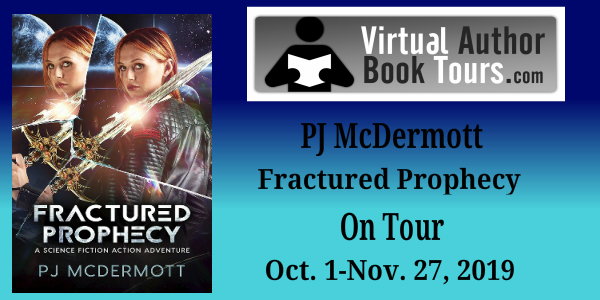 DISCLAIMER: This content has been provided to SHANNON MUIR’S THE PULP AND MYSTERY SHELF by Virtual Author Book Tours. No compensation was received. This information required by the Federal Trade Commission. 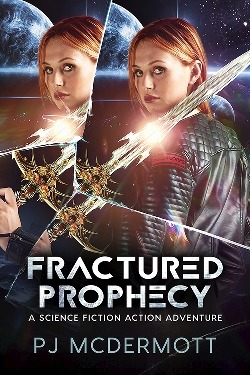 An alien messiah is missing, presumed dead. Will one woman’s interplanetary search for answers bring resurrection or betrayal?

Auriga, 2183. Empath Hickory Lace is desolated by the fiery death of the alien she once considered the son of God. But a tiny flicker of hope that he could still be alive brings her back to the Corps for a perilous mission behind Bikashi lines to recover the powerful sword of Connat. And although the Teacher’s self-sacrifice burns in her heart, the truth she uncovers on the enemy’s planet ignites a fierce new purpose.

A desperate sprint across an alien landscape unearths two different species kept in slavery by the Bikashi. Hickory decides she must liberate these suffering people and plans a daring rescue. But her assignment demands that she find the high-tech sword before the Bikashi can harness its power to enslave her home world.

Will Hickory use her abilities to save the innocent and thereby allow an alien warlord to conquer Earth, or will she leave the slaves to their fate?

Fractured Prophecy is the fourth book in the engrossing Prosperine YA science fiction series. If you like tenacious heroines and political intrigue with spiritual undertones, then you’ll love PJ McDermott’s epic story.

Well conceived and thought out story line about the dangers of a dystopian future. Hickory Lace is a twenty-something commander in the intergalactic space force referred to as the Alien Corps. At the beginning of the novel, Hickory has just faced a major loss in the death of her mentor, a man called The Teacher. But there might be more to The Teacher’s death than meets the eye. The man was supposed to be a prophet, the second coming of Christ living on a distant planet, healing his followers and spreading gospel.

The entire philosophy of the new, post-nuclear-war universe revolves around this man. It has been foretold that a prophet will come just before the end of days. Thus, when The Teacher dies unexpectedly in the previous novel in the series, Hickory is plunged into a despair that she has never faced before. Her depression is so serious, that when an escape pod is found to have survived from The Teacher’s ship, Hickory initially doesn’t even want to go and check it out. Eventually, she is brought around and what follows is an action-packed romp through space that left me intrigued and entertained throughout.

I read through this in less than a day and was on the edge of my seat throughout. Hickory’s inner conflict, not just about the loss of The Teacher but other losses that she has faced along the way, was touching and poignant. I really identified with her character and wanted her to be happy before the end of the book. This is the fourth book in the ‘Prosperine’ series by P.J. Mcdermott and it made me want to read the rest of the series. I loved the storytelling that Mcdermott accomplished in such a well put together and succinct way. The ending packed a good punch as well. Can’t wait to read more! 5 out of 5 stars!

“A Great read. Had me at the first chapter. Did not want to stop. Love the plot, the storyline, the action!!”

“Great characters; storyline with action, drama, and fast-paced intrigue; and unique description of an alien planet, society and it’s population. Highly recommended. I would get other books in the series.”

“McDermott creates a very original and hopeful future world similar to the kind of sci fi I grew up loving. His alien characters are delightful and believable. I could not wait to read the second book, Rise of the Erlachi which is even better!”

“This is a full-blown outer space adventure. Well described characters and a story that has a nice flow to it. I read it straight thru cover to cover.”

The Great Marvo by PJ McDermott

If you are reading this now, please help me.
Let me explain. Not long ago, I was an eminent physician and a successful author with half a dozen bestsellers to my name. I helped people, and then wrote case studies about some of my more colorful clients. Sure, these were mainly movie stars, celebrities, and the cream of society suffering psychologically from their success. Yes, hard to believe. These people were making billions, but they had issues – mostly nightmares about the people they’d swindled, backstabbed, or stamped underfoot on their way to the top of the heap. It made for great reading, and I became very wealthy as a result. You should buy one of my books, you’ll enjoy it. I don’t come cheap, but the sorts of people I dealt with never questioned my fees. Please don’t weep for them, these folks can afford it.
Occasionally, I’d throw in a pro-bono job if I found a particularly interesting case.
That’s where my trouble started.
I received a call from our local maximum-security asylum. The warden is a friend, and he had a patient he thought I might be interested in. This man went by the name of Joshua Tremaine, otherwise known as the Great Marvo. He’d spent the last nine years at Belview Asylum for the criminally insane before being transferred to Pelican Point. When he was arrested, Marvo had just completed a world tour at Caesar’s Palace in Vegas. His act always finished the same way, with the guillotine illusion, only this time, it wasn’t an illusion. His assistant’s head ended up in the lap of the mayor.
When I interviewed the Great Marvo, he was sanguine about his situation. He had a secret, he told me.
“I don’t look it, but I’m five-hundred years old,” he confided.
“Hmmm?” I try to avoid moral judgements in cases where the client is obviously barking mad. I call it “suspension of disbelief.” It’s often the best way to encourage them to open up. And I wanted to hear his story. I sensed another best-seller in the offing.
“Do you know how I’ve managed that?” he asked slyly.
“Sold your soul to the devil?” It was an educated guess. Honestly, the number of people I’ve treated with a Satan fetish.
His tale was interesting, though. He said he’d been practicing the black arts since he was fifteen. It was the reason he’d become a talented and successful performer. The magic was real. He’d made a deal that ensured his continued wellbeing. Every ten years, he would deliver one soul to the devil. Hence his assistant, the unfortunate Shirley, whom he’d been enjoying carnal relationships with for some years. According to Marvo, they’d been together ever since his previous victim, one Maggie Dempster, had mysteriously disappeared. In a later interview, he confessed to tying Ms Dempster’s legs to an anchor and dropping her into New York harbor.
Look, I know it sounds stupid, but he’d given me so much detail, I was intrigued. I went to the library and searched the back issues of the New York Times around the date he’d suggested. Sure enough, I discovered a write up by a local correspondent titled “BODY FOUND IN HARBOUR”. He went on, “The body of Maggie Dempster, a local dilettante, was found floating in the lower bay of New York Harbor. According to the Coroner, the remains of the thirty-two-year-old woman was badly decomposed and had been in the sea for at least a fortnight.”
The newspaper then went on to confirm every detail the great Marvo had provided to me: age, ethnicity, occupation, and a few points on the cabalistic rites Marvo allegedly performed on her body.
It was obvious he was playing with me. Marvo must have researched the Times archives and memorized the details of Dempster’s death.
I decided to put an end to his shenanigans. Marvo had given me a list of towns he’d lived in over the last two centuries. I researched the archives of every major newspaper and produced an extensive list of murder victims, places, dates, and circumstances going back in ten-year intervals. Then I went to see Marvo again. I was able to cross-reference every single instance where he claimed he had murdered someone.
Truly, the man’s resourcefulness was beyond the pale. I decided to publish his story to demonstrate the lengths a psycho would go to justify his crimes. He said he had to do it because he was a five-hundred-year-old devil worshiper.
I called the book Worshipping the Devil with the Great Marvo and other psychopaths. It was a huge success, largely because I put a comic twist on everything, including cartoon drawings of the Great Marvo.
My agent decided there was potential for a second in the series and I paid Marvo a return visit. Somehow, he’d obtained a copy of the book. He wasn’t happy. When he was escorted into the interview room, his black eyes glared at me, and spittle fell from his mouth. He raised his arms and lightning fell from his outstretched fingers. That was the point when I realized I’d made a huge mistake.
And that’s why I’m here now, telling you this story. Writing it as you read. You’ve noticed the words emerging from the paper as your eyes glance over the pages, surely? You see, I am the book. The Great Marvo cast a spell, turning me into the sequel. It was his idea of justice. He says he’ll release me if anyone ever bothers to read all five-hundred pages he committed me to write. The only stipulation is you and I, dear reader, must swap places. But I’m sure you will continue reading to the end. It will, after all, be an absorbing read…
Twilight Zone theme plays. 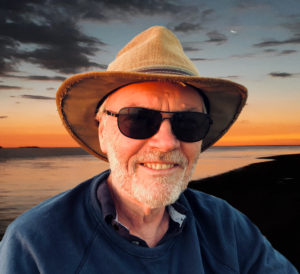 Born in Scotland, PJ McDermott moved to Australia 50 years ago, and now lives in the tropics in the North Queensland town of Trinity Beach. He started writing after he retired from the corporate treadmill and published his first novel in 2015— Small Fish Big Fish, a coming of age thriller set during the sixties. But he has always read and loved adventure and science fiction books. PJ has fond early memories of hiding under the blankets in his bed, torch in hand, reading 20,000 Leagues Under the Sea and Gulliver’s Travels. In his teenage years, like many other kids, he had lots of unanswered questions about God and the purpose of life (is there one?). Even today, similar questions remain unanswered in his mind, providing him with a springboard for his book series, ‘Prosperine’.

This giveaway is for the winner’s choice of one print or ebook copy of the book. Print is open to Canada, Australia, and the U.S. only and ebook is available worldwide. There will be 3 winners. This giveaway ends November 29, 2019, midnight pacific time.

This schedule is subject to change.