DISCLAIMER: This content has been provided to THE PULP AND MYSTERY SHELF by YA Bound Book Tours. No compensation was received. This information required by the Federal Trade Commission. 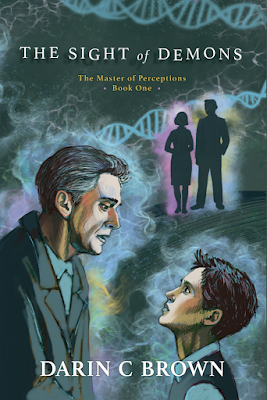 The Sight of Demons
by Darin C. Brown

Hunter Miller sees demons. The terrifying shadows engulf him and everyone he knows—yet nobody else notices their presence.
Hunter can’t escape them, so he sets out to understand them. Why do they follow him? What are they trying to tell him?
In this first installment of the Master of Perceptions series, pre-teen Hunter discovers that every sensation the demons produce—whether it be sight, sound, texture, flavor, or smell—has a different meaning. And that by breaking this code, he just might be able to harness their power.

About the Author
DARIN C. BROWN spent the last twenty years saving lives as an emergency medicine physician in New Hampshire and Maine. His master’s degree in biomedical engineering and PhD in biophysics helped him conceptualize Hunter’s astounding capabilities. When he’s not writing, he directs Murder Mystery Dinner Theater, including the biannual shows on the Conway Scenic Railroad. In addition to his varied academic interests, he competes at the national level in master’s track. He currently resides in the White Mountains of New Hampshire with his wife, Dr. Sandra Brown, and their many pets.
Author Links: