SF & Fantasy titles will be featured daily between August 24th and September 1st, 2019. 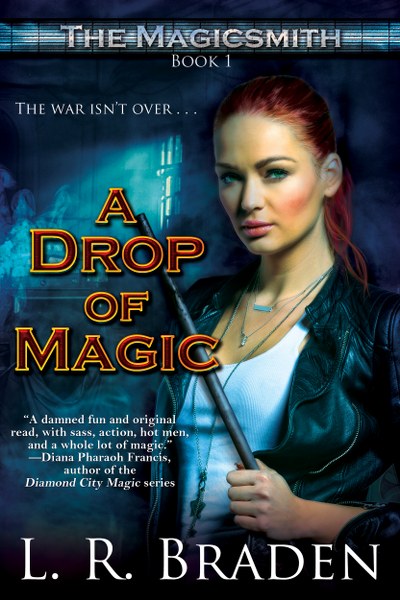 The war isn’t over . . .
With the world clinging to a fragile peace forced on the Fae by humanity
after the Faerie Wars, metalsmith Alex Blackwood is plunged into the
world of the half-fae who traffick in illegal magical artifacts. Her
best friend’s murder and his cryptic last message place her in the
crosshairs of a scheme to reignite the decade-old war between humans
and fae.
Worse, violent attacks against her and the arrival of a fae knight on a
mission force Alex to face a devastating revelation of who
and what she is. To catch a killer, retrieve a
dangerous artifact, and stop a war, Alex will have to accept that
she’s an unregistered fae “halfer” with a unique magical
talent—a talent that would change everything she believes about her
past, her art, and her future.
Her world is crumbling around her, and Alex will have to decide who to
trust if she and the world are going to survive.
“A Drop of Magic is a damned fun and original read, with sass, action,
hot men, and a whole lot of magic.”
—Diana Pharaoh Francis, author of the Diamond City Magic, Magicfall,
and Horngate Witches series
Add to Goodreads
Amazon * Apple * B&N * Google * Kobo

How did you come up with the title for this book?

A Drop of Magic was originally called Crossroads when I started writing it, an echo of the fae bar with the same name. This was because the mortal realm, where the story takes place, is considered a crossroads world to the fae, a place where they can pass easily from one realm to another. However, the title Crossroads was a little vague to provoke the right image in a reader’s imagination and has been used many times. So I wrote down a list of all the prominent ideas in the book and started checking them to see how they sounded and if they’d been used. At one point in the story, Kai tells Alex a single drop of magic is all it takes to make someone fae. I really liked that line, and I was happy to find that a title search for A Drop of Magic yielded no results. Thus, A Drop of Magic.

If you had to do it all over again, would you change anything in your latest book?

Yes and no. I’m a perfectionist, so even if I love something I will always find something to change. This was never more clear than when I had to approve the page proofs for A Drop of Magic, meaning I had to read through the whole book but I wasn’t allowed to change anything. Not move a comma, not change a word, nothing. It drove me insane.

Born and raised in Colorado, L. R. BRADEN makes her home in the foothills
of the Rocky Mountains with her wonderful husband, precocious daughter, and
psychotic cat. With degrees in both English literature and
metalsmithing, she splits her time between writing and art. A
Drop of Magic is her first novel.
Website * Facebook * Amazon * Goodreads